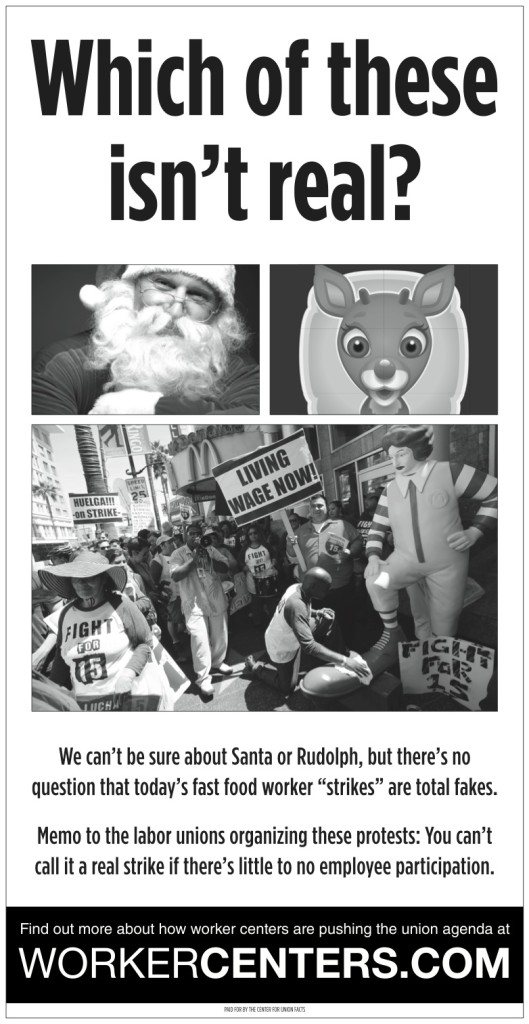 We’re also setting the record straight with a new report from our WorkerCenters.com project that shows just how stage-managed these protests are. In total, we tracked $15 million from SEIU through to the worker centers, and nearly $4 million from all arms of Big Labor to the PR shop running the campaigns.

Our Executive Director illustrates how this looks on the ground using New York as a glittering example of SEIU’s operation: “[T]he Fast Food Workers Committee in New York reported zero members last year, took in $1.8 million from the SEIU (99 percent of its revenues) and then sent $1.6 million out the backdoor to New York Communities for Change.”

SEIU funds other “Workers Organizing Committees” (WOCs) across the country that receive a check from the SEIU that goes mostly to fund “worker centers.” Worker centers, in turn, take advantage of a loophole in labor law to run SEIU-stage-managed protests in a largely unregulated manner.

Our executive director notes, “These protests aren’t about fast-food employees organically banding together for higher pay; they’re about the SEIU and its war against the food industry. So if you encounter one of these protests on Thursday while out for lunch, ask for no union, hold the spin.”