The American Federation of Teachers and its boss, Randi Weingarten, have waged a national war on public school reform that spans decades. Driven by the maxim, “Nice political career you have, shame if anything were to happen to it,” the nation’s most militant teachers union fights advocates for better public schools from New York to Los Angeles.

Today’s target is Pennsylvania, where the AFT is running ads attacking Gov. Tom Corbett’s education reforms. You see, Philadelphia school officials (which are controlled by a state-appointed School Reform Commission) are currently in negotiations with the Philadelphia Federation of Teachers  which is an AFT local. And the new chair of the School Reform Commission, former Democratic City Councilman Bill Green, wants concessions from the union so the district can do more, even as the district closes its budget deficit.

Republicans who control the state legislature even expressed a willingness to offer the district more state support if the proposed work rule changes went forward. Of course, money for children is nothing to Randi and her minions if it comes with strings that might lead to accountability: Another AFT local is endangering a $40 million grant to Pittsburgh schools by its obstinacy in implementing reforms that it agreed to in negotiations. 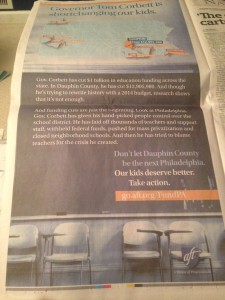 And the AFT has the bold-faced effrontery to lay blame for money flying away at the feet of Pennsylvania Gov. Corbett, in the accompanying ad (which ran in the Patriot-News, a Pennsylvania newspaper).

In reality, Corbett’s proposed 2014 budget includes a $400 million boost to Pennsylvania schools funding. If anything, it’s the AFT (for the reasons above) that is standing in the way of money going to Pennsylvania’s students.

This is a sorry position for teachers—not their union leaders, like Weingarten—to find themselves in. While the state looks to shore up school budgets, their union is standing in the way, trying to protect bad teachers in the process.

Interestingly, a proposed piece of state legislation would protect public school teachers from having to subsidize political attacks like the AFT’s. A bill is pending that would require public-sector unions in Pennsylvania to solicit affirmative contributions rather than use a publicly funded check-off to fund their political operations. It resembles the “paycheck protection” provision of the federal Employee Rights Act, a bill which would allow private-sector employees to refrain from supporting unions’ political operations. (Most federal labor laws don’t affect public-sector unions, which are governed by state law.)

And like its federal cousin, which is supported by 83 percent of union households, a recent Susquehanna poll found that a majority of union households favor the Pennsylvania proposal. If Randi, her Pennsylvania minions, and the AFT continue to put keeping bad teachers in the classroom ahead of reform, teacher quality, and money for children, expect that support to rise.