Organized labor is speaking out of both sides of its mouth in supporting a minimum wage hike but not increased employee rights. 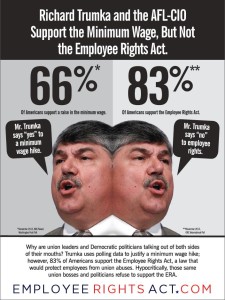 The ad then asks, “Why are union leaders and Democratic politicians talking out of both sides of their mouths?” explaining, “Trumka uses polling data to justify a minimum wage hike; however, 83% of Americans support the Employee Rights Act, a law that would protect employees from union abuses. Hypocritically, those same union bosses and politicians refuse to support the ERA.”

The ERA is composed of eight straightforward principles, including such basic democratic principles as the right to secret ballot voting in unionization elections and requiring that unions receive the express consent of their members before spending union dues on political activities, aka, paycheck protection.

“Every day Trumka and the unions bemoan inequality of income, but the inequality of employee rights relative to the power of labor unions deserves similar attention,” said Richard Berman, executive director of the Center for Union Facts. “Ironically, this is one issue over which the AFL-CIO has enormous control yet refuses to address. Perhaps they should deal with their own inequities before weighing in on others.”

More information on the ERA is available online at EmployeeRightsAct.com.

To schedule an interview, or to comment on this release, please contact Banks Woodruff at [email protected] or (202) 463-7106.

The Center for Union Facts is a non-profit organization supported by foundations, businesses, union members, and the general public. We are dedicated to showing Americans the facts about today’s union leadership.