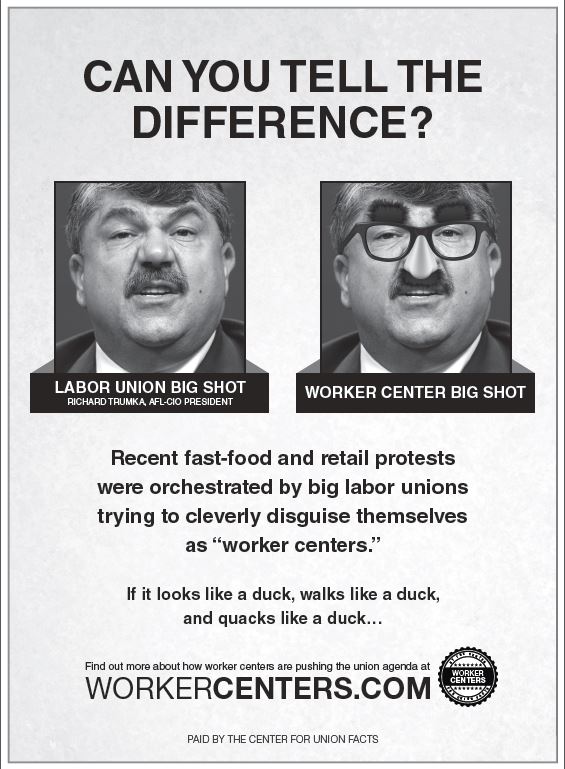 WASHINGTON – Today, the Center for Union Facts ran a full-page ad in Roll Call calling attention to the rise of “worker centers”—labor-backed community organizations and non-profits that allow unions to attack businesses without having to comply with federal labor laws.

This ad coincides with today’s hearing in the House Subcommittee on Health, Employment, Labor, and Pensions on the growing importance of these groups and the labor movement’s role in both founding and funding them. It also comes after the AFL-CIO’s decision last week to extend membership to worker centers, and the recent worker-center led strikes at fast food and retail outlets.

The ad features two photographs of AFL-CIO President Richard Trumka, and asks “Can You Tell The Difference?” The first photograph of Trumka is captioned, “Labor Union Big Shot”; the second is the same photograph except with Trumka wearing a cheap disguise, with the caption, “Worker Center Big Shot”.

The ad continues: “Recent fast-food and retail protests were orchestrated by big labor unions trying to cleverly disguise themselves as ‘worker centers.’ If it looks like a duck, walks like a duck, and quacks like a duck…”

The ad concludes by prompting readers to visit a new website launched by the Center for Union Facts devoted to identifying worker centers for what they really are.

“Worker centers are nothing more than a desperate attempt by labor leaders to reverse their continued declines in membership and relevancy,” said Richard Berman, Executive Director of the Center for Union Facts. “But they should still be regulated like the unions that fund them and direct their every move.”