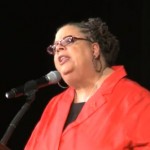 Chicago Teachers Union President Karen Lewis was a big hit at the Illinois Labor History Society. As the keynote speaker at the Society’s “Salute to Labor’s Historic Heroes from the History Makers of Today” event, Lewis recalled the labor days of yore by saying, “[W]e are in a moment where the wealth disparity in this country is very reminiscent of the robber baron ages. The labor leaders of that time, though, were ready to kill. They were. They were just–off with their heads. They were seriously talking about that.” Minor applause ensued, along with a few laughs. But Lewis, who’s already known for her jokes, thankfully cleared things up: “I don’t think we’re at that point.”

CA State Workers May Get a “New” Holiday

Jon Ortiz at the Sacramento Bee’s State Worker blog reports that Assemblyman Roger Hernández has introduced a bill that would re-institute a state holiday on the second Monday of October, one of the two holidays that were eliminated in 2009 (Lincoln’s Birthday was the other).

Most people call this “Columbus Day,” but Hernandez’ bill renames the new holiday “Native American Day.” It would also be a paid holiday for state employees. California public employees already enjoy greater compensation than their counterparts in the private sector. Although the two holidays were replaced with two “professional development days” in 2010, Ortiz reports that Hernández’s bill would not amend that change.

According to the National Institute on Money in State Politics, public sector unions contributed $40,500 to Hernández’s 2012 campaign.

The National Labor Relations Board’s (NLRB) decision in D.R. Horton condemned mandatory arbitration agreements barring class actions as a part of the Board’s larger goal of broadening the definition of “concerted activity.” In other words, the NLRB is trying to expand its power. As Allison Frankel’s “On the Case” explains, a three-judge panel in the Eighth Circuit Court of Appeals was “utterly dismissive” of the NLRB’s analysis and granted the Board no deference. Importantly, the judges noted that most court decisions since D.R. Horton have not used the NLRB’s reasoning.

Teamsters President Jimmy Hoffa Jr. knows a thing or two about steamrolling the opposition. So it’s no surprise that Hoffa supports “reform” of the Senate filibuster, which allows the minority party to stop a bill if it cannot garner 60 votes in its favor. Hoffa explains that if not for the filibuster, EFCA would be the law of the land. Naturally, both parties find the rules afforded the Senate minority abhorrent—but only until that party is in the minority. We’d guess that if the partisan tables were turned and the Employee Rights Act was up for a vote, Hoffa would be singing a different tune.