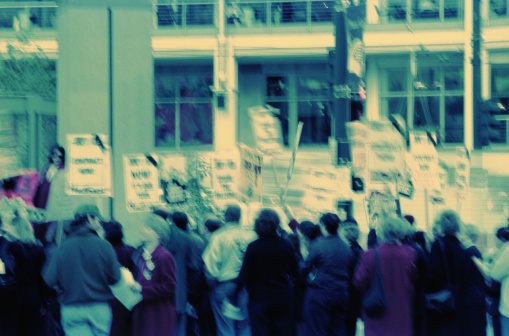 “Free speech for me, but not thee” could well be organized labor’s new slogan in California.

Everyone can enjoy the First Amendment for the guarantees of freedom of religion, speech, press, and assembly. But labor unions in California have been guaranteed even more speech rights than the rest of us.

In California, the Moscone Act and other related statutes make it harder for businesses to obtain a restraining order or injunction against labor union picketers than against other people or groups. This union perk even extends to labor protesting on someone’s private property. Lower courts in California struck down the law, saying that it afforded extra free speech protections to labor unions that did not exist for others wishing to publicly speak on another’s property. The courts ruled that this was a content-based restriction, which is impermissible under the First Amendment. It was also alternatively interpreted as a violation of the Fourteenth Amendment’s equal protection clause.

In the case at issue, the store did not allow any demonstrators within 20 feet of the entrance and had asked police to remove members of the United Food and Commercial Workers Union (UFCW) who were handing out flyers in front of the store.

But the California Supreme Court ruled that labor unions could picket in the doorway of a private store and receive legal protection. This gives labor an advantage over all other speakers that would want to stand in front of a store and exercise free speech. Justice Goodwin Liu went as far to say that the owner could not even place reasonable limits on the pickets by those invading his property — though most of the other justices disagreed.

Putting aside the freedom of association problems inherent in non-right-to-work states and even the speech questions concerning the spending of agency fees and union dues, there are other advantages that labor receives in the form of free speech protections.

The Norris-LaGuardia Act, a federal law, has elements similar to California’s Moscone Act when it comes to discouraging injunctions against labor pickets. Federal courts have taken a measured approach to Norris-LaGuardia and have not given unions an unquestioned right to picket on private property. In contrast, the California laws only allow a judge to stop a picket if there are illegal acts that will result in significant property damage. Nonetheless, Norris-LaGuardia is unique in giving certain types of speech — speech relating to a labor dispute — priority over many other forms.

Section 8(a)(1) of the Labor-Management Relations Act (LMRA), also known as Taft-Hartley, restricts the type of speech permitted by employers when employees have engaged in an organizing campaign. Courts have interpreted employers’ obligations very strictly, stopping employers from mentioning most anything that could be remotely perceived as discouraging unionization.

There is also the still-undecided Roundy’s case before the National Labor Relations Board (NLRB) which could require an employer to provide unions access to private property if it allows any outside group access. If the NLRB follows its recent habits of pro-organized labor activism, it would create an even bigger issue when it comes to a union’s invasion of the employer’s physical and virtual property.

While everyone can enjoy free speech rights, labor has the special benefit of a few bonus provisions that give its free speech an advantage over the rest of us.