After 20 inches of snow were dumped on New York City last week, the media has been atwitter about allegations made by one city councilman. Dan Halloran claimed he was 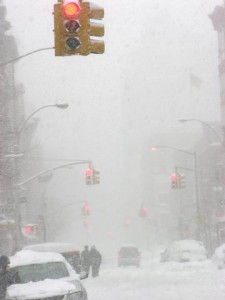 approached by three Sanitation Department workers who confessed they had been ordered to slow down the snow removal as a protest against recent budget cuts.

But apparently the feds do–at least enough to open an investigation:

Federal prosecutors in Brooklyn have opened a preliminary investigation into allegations that disgruntled sanitation workers sabotaged the cleanup after the blizzard last week that left some neighborhoods snowbound for days, people who have been briefed on the inquiry said Tuesday.

The investigation is focusing on whether there was a work slowdown and, if so, whether it was an effort to pad overtime. If the actions took place, two of those people said, they could constitute wire fraud or wire fraud conspiracy, both federal crimes. Both people spoke on the condition of anonymity because the investigation was continuing.

Between 660 and 720 Sanitation workers called in sick for the cleanup of last week’s blizzard — more than double the usual rate, The Post has learned.

About 11 to 12 percent of the Sanitation Department’s 6,000-strong force didn’t show up for work on Monday or Tuesday, city officials confirmed, as 20 inches of snow brought the Apple to a near-standstill.

Of course, there’s no way of knowing whether those absent employees were protesting or snowed in. But for what it’s worth, this is far from the first time Teamsters-affiliated sanitation workers have called in sick. The worst incident occurred in nearby Yonkers where garbage festered in some neighborhoods for weeks after a budget battle angered the local sanitation union. On one day, 46 out of 48 sanitation workers scheduled to pick up garbage called in sick. More details will come out in the next few weeks, and in the meantime, we are keeping an eye on this.