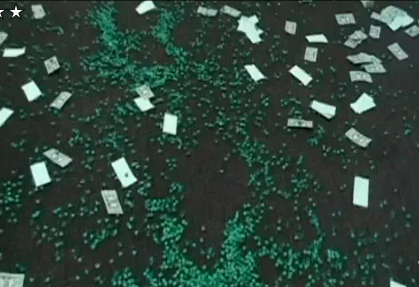 From the SEIU blog yesterday:

“To symbolize this loss, 14,000 little monopoly houses were dropped by “Mr. Moneybags” at the action site. […] Both actions are part of a continued effort to demand that big bank executives–like US Bancorp and Wells Fargo–do the right thing to fulfill their responsibility to the taxpayers that bailed them out by supporting better jobs and a green future, and helping keep working Americans in their homes.”

So you can watch the video here, but otherwise, trust me when I tell you that the image to the right is the floor of the Wells Fargo once the protesters were done with the place. They throw monopoly game piece houses everywhere and printed up thousands of “Minneapoly” bills which were thrown out of money bags. Here’s their self-congratulatory post today on SEIU.org.

I hope no small children walked in during the protest given the choking hazard of those little houses. The SEIU should have a sign: “SEIU Protests and Rallies: Unsuitable for employers and children under the age of 8.”

I find this whole thing ironic because while they probably don’t mind that they created work for their SEIU compatriots who clean Minneapolis, the amount of trash they created–littering with paper and little plastic houses– doesn’t really gel with the SEIU’s other major agenda point in Minneapolis: Being environmentally friendly. Did you catch the “green future” quote? 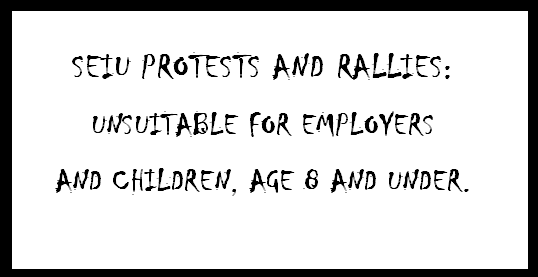 It should not come a s surprise that the SEIU’s “green” agenda is more about additional things to hold against employers during negotiations and less about actually caring for the environment.

In December, I wrote that “[c]aring about the environment and conservation is great (a nice change from how unions used to be), and workers safety is paramount, but for the SEIU, it is also a REALLY convenient thing to use as a trump card in negotiations.”

I have a problem with a protest trashing a place of business, but like I said, I imagine unionized workers actually did have to clean up the mess. If the 300 janitors who marched in December for greener work places want to speak out for the environment, maybe they should say something about yesterday’s protest.