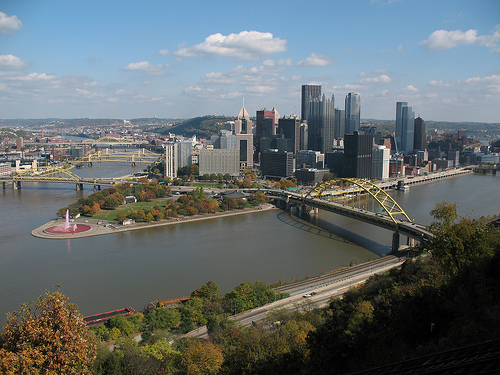 Labor’s had a tough year, but hope for the future rests in Pittsburgh this week.

As the AFL-CIO holds its national conference in the city this week, fully expecting to elect their new leader, unions are forced to contemplate their future.

But they can’t shake the feelings they’ve been here before. When John Sweeney took over the AFL-CIO with the promise of boosting membership and bring labor unions a semblance of modern relevance, they heard the same lines they will likely hear again this week.

Richard Trumka, soon to be president of the AFL-CIO,  is a man some fear has been waiting too long in the wings to make a real change.  Sweeney leaves office with many of his promises unfulfilled. Will Trumka?

As odd as it seems, a site that provides “independent and incisive coverage of the labor movement and the struggles of workers to obtain safe, healthy and just workplaces” asks itself some very tough questions about the future of organized labor.  In These Times explains:

Hope for a revived union movement has come in successive waves in recent decades, only to recede over time. When the national AFL-CIO meets next week in Pittsburgh to choose new officers, the fans in the stands will be cheering the latest change in quarterbacks. But neither handing the ball to Rich Trumka (current secretary-treasurer of the federation) or creating a united front of the AFL, Change To Win (CTW), and the National Education Association—a parallel effort now stalled by Trumka’s own election–are likely to stem union decline, by themselves. Outside the Beltway, labor’s condition continues to worsen as workers face an avalanche of job cuts and contract concessions.