Posted on Jun 04, 2008 by Minnesotans for Employee Freedom 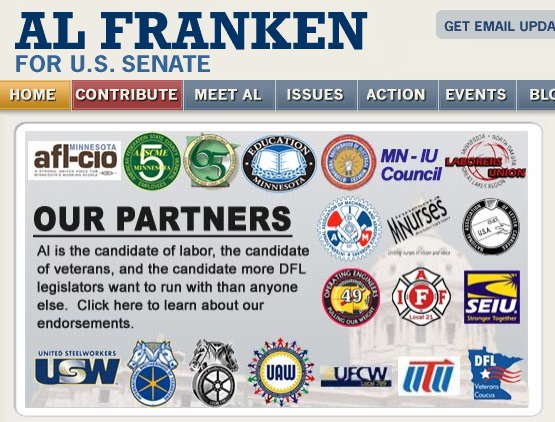 Al Franken has now been endorsed by 21 unions – that’s right, 21.  Why exactly are these big-time union bosses backing Al Franken?

As Tim Lovasson, President of the Communication Workers of America Minnesota State Council said, “we support Al because Al supports the middle class and the Employee Free Choice Act.”

The union bosses support Al Franken because he will be another vote in the Senate for their anti-democratic power grab, the misleadingly named, Employee Free Choice Act.

We all know that it’s risky business to trust union bosses with words or numbers, but this is a little much — even for them.  Labeling a piece of legislation “Free Choice” when it takes away the worker’s fundamental right to a private ballot in a union organizing election is simply stunning.

Inviting the union boss, in effect, into the voting booth is the opposite of a “Free Choice,” it’s no choice at all.  It’s coercion, intimidation, and harassment.

I’m sure that the powerful union bosses, desperately trying to reverse years’ worth of declining membership rolls, will continue to step forward on behalf of candidates like Al Franken who will do their bidding.

But whether 21, or a 121, unions endorse Al Franken, Minnesota workers deserve to have their rights in the workplace protected.