CUF Launches Campaign To Keep UAW Corruption Out of TN 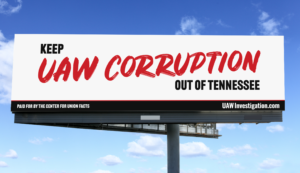 Today — in conjunction with the Tennessee General Assembly’s special session on the forthcoming Ford auto plant — the Center for Union Facts (CUF) is launching a public education campaign to keep United Auto Workers’ corruption out of Tennessee.

The campaign includes five digital billboards, a full-page ad in the Tennessean, and a letter writing campaign.

The billboards feature two different messages. The first message calls on legislators to “Keep UAW Corruption Out of Tennessee.” The second features a green checkmark next to “Ford Jobs in Memphis” and a large red “X” next to “UAW Corruption,” signifying that Ford auto jobs are welcome in the Memphis region, but they should come without UAW representation attached.

All five billboards are located around the state capitol in Nashville. You can see each billboard design here and here.

The full-page ad running in the Tennessean today mirrors the digital billboard with a green checkmark next to “Ford Jobs” and a red “X” next to UAW corruption. You can see the full ad here. It calls on Tennessee workers to be guaranteed a secret ballot vote on UAW representation.