CWA Called Out For Allegedly Spreading “Misinformation” On Pay Discrepancies

Gannett, the newspaper management firm, issued a devastating fact-check of a misleading report published by the Communications Workers of America’s NewsGuild.

The journalist union claimed that Gannett was paying non-white and female reporters less than their white male counterparts. The report was based on the survey responses of 450 journalists in 14 Gannett newsrooms. Unionized reporters shared the report far and wide on social media and many sympathetic newsrooms demanded answers from Gannett.

Unfortunately for the NewsGuild, Gannett had answers and the company published the receipts.

In a three-page letter (see each page here, here and here), Gannett picked apart the NewsGuild’s report piece-by-piece, citing an Inclusion Report released by the company last year. Gannett’s Labor Relations Counsel Thomas Zipfel accused the NewsGuild of spreading misinformation by surveying just 14 of the company’s more than 250 newsrooms. He also claimed the guild only released the report as a bad faith effort to “disparage the company in the court of public opinion.” 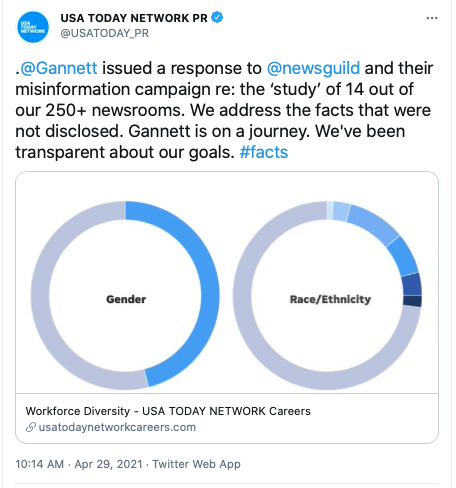 Zipfel picked apart the statistical methods used by the NewsGuild, noting that the guild chose not to release the job titles of the respondents which heavily influenced the survey’s findings. He explained that the guild did not even separate the positions that required only a high school diploma from the jobs that required a college degree which lead to a deceptive comparison of median salaries. The survey also excluded newsrooms in cities with higher costs of living which would be relevant for any comparison to the national median.

Overall, it appears reporters at the NewsGuild’s newsrooms work in environments that are less diverse, have fewer female employees, and are lower-paying — all for the privilege of getting to line CWA leaders’ pockets with their union dues.