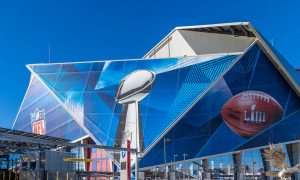 In honor of the upcoming Super Bowl, it’s time to round up the amount of money labor unions have spent on sporting events.

Several unions are guilty of using members’ dues money to buy tickets to professional sporting events or purchase advertising at arenas. According to Department of Labor filings, in 2018 Plumbers AFL-CIO spent $376,605 on advertisements at the Capital One Arena in Washington, D.C. That same year, United Food and Commercial Workers Local 7 spent almost $20,000 on season tickets to the Denver Broncos. In 2017, International Brotherhood of Electrical Workers Local 98 spent $66,500 on tickets to sporting events, including the Philadelphia Sixers.

But when it comes to egregious spending, the UAW may be one of the worst offenders. (And it’s not just sporting events, the recent federal investigation into the UAW has unearthed union spending on everything from personalized bottles of wine to stays at luxury resorts.)

Some other spending highlights from UAW locals in 2018 include:

This spending information, as well as a comprehensive look at everything the UAW and its locals have used members’ dues for, is available on UAWAccountability.com.