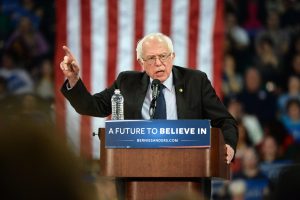 Last Thursday, it became public that for months campaign workers employed by Vermont Senator and presidential candidate Bernie Sanders have demanded that their pay be consistent with the Senator’s rhetoric on minimum wage. Sanders’ campaign staff, who are represented by the United Food & Commercial Workers Local 400, issued a statement claiming they “cannot be expected to build the largest grassroots organizing program in American history while making poverty wages.”

This isn’t great optics for Sanders, who has been so vocal in his praise for a $15 federal minimum wage that it has become a defining topic in his bid for the Democratic Party’s presidential nomination. To quell accusations that not all of Sanders’ campaign employees earned the equivalent of $15 an hour—field organizers apparently made $36,000 annually, only $13 an hour after working a 60 hour week—the presidential hopeful placated staffers by increasing their annual salaries to the equivalent of $15 an hour.

But there’s a catch—in order to afford paying workers $15, Sanders’ campaign decided to “limit the amount of time his organizers can work.” In other words, Sanders 2020 will be cutting staff hours—a result of increasing the minimum wage which has played out in real ways for employees across the country, Bernie Sanders campaign staff now included.

It seems Sanders is starting to see how difficult it is to deliver on his campaign promises—even to his own staff. It begs the question: How will Sanders keep pushing for the labor movement’s latest demand—$15 minimum wage—when he can’t even deliver that for his own staff without limiting opportunity for workers?