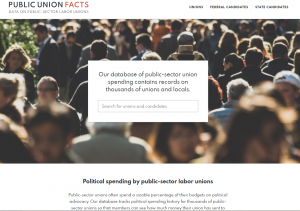 On Monday, the Center for Union Facts launched a new project www.PublicUnionFacts.com. The first of its kind, the website compiles 20 years of data on public-sector union political spending in one place. The site includes over 385,000 political contributions from nearly 5,000 labor unions.

Unlike most private unions, public-sector unions are not currently required to file financial disclosures with the Labor Department. The best source of information on public-sector union spending habits is its political giving. Unfortunately, this information is often spread across multiple difficult-to-access state databases. With PublicUnionFacts.com, employees can simply type in the name of their union to find its political spending history.

The site also highlights the disproportionate amount of member dues unions have sent to Democratic causes over the last 20 years. Of the $1.5 billion that was sent directly to Republicans or Democrats, 90 percent went to Democrats with only 10 percent going to Republicans. Additionally, Democrats in just five states—California, New York, Illinois, Pennsylvania, and Oregon—received more money from public unions than Republicans did nationwide.

After the Supreme Court’s landmark decision in Janus vs. AFSCME, public-sector union members are no longer forced to financially support their union as a condition of employment. Now, workers can choose to keep the portion of their dues that would have gone to support predominantly left-leaning causes. In fact, early data from the Labor Department shows many workers are doing just that.

There is a growing disconnect between how unions are spending money and what workers really want. Now, with access to more facts, employees can start to hold their representatives accountable.