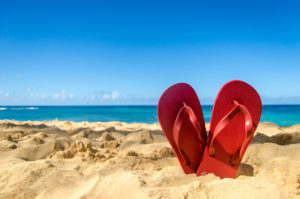 While staffers in Congress are complaining about the right to bare arms (and shoulders), Service Employees International Union (SEIU) Local 221 is fighting for the right to wear Birkenstocks and swim trunks at work in the summer.

Here’s the backstory. An official from the City of San Diego sent an email highlighting that a relaxed dress code would be maintained throughout the summer months. The email states:

“As we have a County tradition to dress ‘cool’ during our summer months, I am again declaring June 20 through September 21 as ‘Cool Summer Days in the County.’

Effective Tuesday, June 20th 2017, the County’s observance of appropriate business casual attire, normally in place only on Fridays, will be extended to apply to every workday through September 21, 2017…”

Not a bad email to receive as an employee, right? Not so fast: Local 221 is about to snatch defeat from the jaws of victory. The union has decided to take the County of San Diego to labor court over “illegal” dress code changes.  Last week, Local 221 filed a new Unfair Labor Practice Charge regarding the County’s change to the dress code for summer months. Section 7 of the complaint states:

The charge goes on to give a long-winded account of the County of San Diego’s previous dress code instructions. Local 221 has even developed a petition letter for employees to sign their names. After the letter was released, the Chief Administrative Officer for the City of San Diego released a letter rescinding the dress option for SEIU-represented employees. Now SEIU-represented employees must wear dress pants and normal attire every day of the week except for Friday. Union leadership, specifically Local 221’s staff director Micki Bursalyan, was exultant over its casual attire conquest: “Yes, we are nitpicking, but every single time these employees have the right to bargain, they want that right. I think the difference here is it’s a bargaining year. So I think the difference is we’re on the lookout for policy changes.”

No wonder Americans are skeptical of union power. A Gallup poll from last year shows that only 36 percent of Americans want unions to have more influence in their lives.