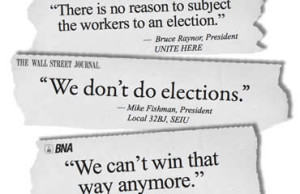 Unions trade on claims of their wide public support, but even those boasts are getting narrower and narrower. A few labor flacks touted the findings of a recently released Pew Research Center poll about Americans’ views on unions, but in truth it mostly bears bad news for the union movement.

Unions’ favorability, a clear majority in the late 1990s and early 2000s, has now fallen to 48 percent. Americans are nearly evenly divided over whether the longstanding decline in union power is good for the country: Only 45 percent say it has been harmful. The results echo the findings of Gallup, which has shown a 22-point collapse in union approval from 1950s-era highs to modern lows.

Union bosses are nailing their hopes to demographic changes, touting a finding that young people favor unions more highly than their elders. But a closer look at the numbers suggests that might actually be a problem, because young people aren’t joining unions in any large numbers. Bureau of Labor Statistics data on how many employees of various ages are union members shows that the rate of unionization among working-age (16-64 year-old) people closely tracks their age—meaning that younger workers are least likely to be union members, and those about to reach retirement age are most likely. 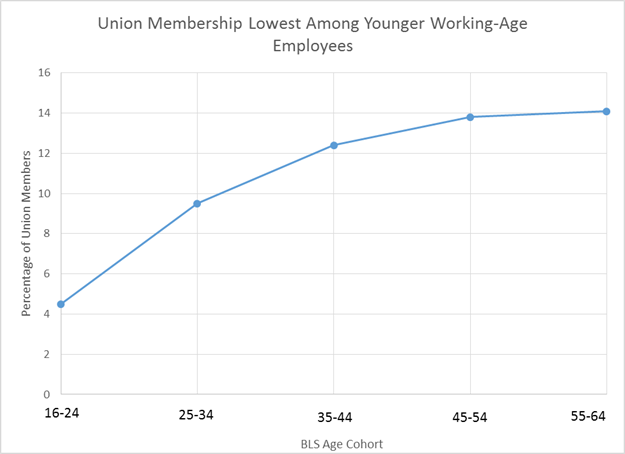 Perhaps familiarity with Big Labor really does breed contempt. The older employees more likely to be unionized (often because their jobs had been unionized before they were hired) saw the corruption first-hand, with unions guilty of misdeeds ranging from the Teamsters’ infiltration by the Mafia, the embezzlement of $4.6 million by Washington Teachers Union officials, to corruption in the union-controlled Union Labor Life Insurance Company. Those who weren’t in unions read those headlines and saw the effects of the unions’ activities, like trash piling up in the streets of New York during a 1981 strike.

With Trumka’s AFL-CIO beginning a push for a replacement to the failed card-check bill, and the SEIU continuing its high-profile drive to unionize fast-food employees, a whole new generation of employees will now have a chance to learn why their elders disliked unions in the first place.