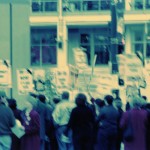 The AFL-CIO is considering opening unions to non-union members in an effort to bolster the ranks of union ground troops with members they would otherwise have no hope of organizing. The 12 million-member union federation will vote to include non-union members at their yearly convention in September. Non-union members would primarily serve as grassroots organizers taking part in protests and activism at the state level, with particular attention paid toward minimum wage laws. Through “organization,” unions are able to reap the benefits of dues-paying workers ready to strike without having to actually spend any money representing them.

Union acceptance of non-union members is nothing new. Working America, the non-union arm of the AFL-CIO, claims over 3 million members which would make it larger than any single union in the AFL-CIO. The primary purpose of Working America is door-to-door canvasing and engaging in conversations with residents. During elections, Working America members return to convince the people to vote for certain candidates.  Working America doesn’t further workers’ rights, it only furthers unions’ heavily biased political agenda.

Additionally, workers centers, labor’s latest creation, are non-union workers in industries where unions have had little success organizing. Most of these workers are in the food service, retail, or day labor industries, where unions have had difficulty gaining majority support to organize. Workers centers frequently agitate against non-union industries: For example, the Restaurant Opportunities Center (ROC), a workers center, is under investigation by the U.S. House of Representatives for a “history of intimidation towards opponents and management problems.”  By setting up workers centers, unions hope to circumnavigate labor laws, collect more dues, and grow their numbers.

In many local, state, and national elections, big labor was able to heavily influence the outcome by a sound infrastructure and network of hired electioneers. Labor hopes to expand this network by reaching out to non-union members with hopes of expanding the union ground force as well as their already inflated election purse.