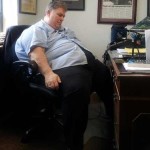 Local 983 of District Council 37, American Federation of State County and Municipal Employees (AFSCME) AFL-CIO, pays its president, Mark Rosenthal, over $156,000 per year, according to the New York Post. It seems like members might not receive much work for all that dues money. The Post alleges:

The 400-pound president of Local 983 of District Council 37 — the city’s largest blue-collar municipal-workers union — often downs a huge meal, then drops into dreamland in the early afternoon, members of the union’s executive board told The Post.

That’s him snoozing in the accompanying picture, and the Post has several more candid photos of Rosenthal’s cat-naps. (He called them “Power Naps.”) The big boss is so obese that he reportedly broke a chair at McDonald’s by sitting down.

That hasn’t stopped him from racking up $1400 per month in food bills on the union’s treasury, according to other union officials. Union officials have also alleged that he overpaid the union’s attorney. Now Rosenthal is suing the union’s board to reinstate the now-fired attorney he allegedly overpaid.

The irony in this titanic showdown over potential self-dealing and cronyism? When Rosenthal was elected in 1998, he ran as a reformer. Without real structural reform to union governance, the trappings of power and forced dues money may continue to corrupt absolutely.