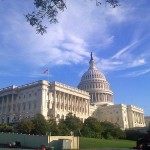 A couple of weeks ago at the beginning of April, the Senate held a so-called “vote-a-rama” on dozens of amendments to the Senate version of the budget. One of those amendments, introduced by Sen. Tim Scott (R-South Carolina), was a provision which would forbid federal agencies from automatically deducting union dues from employees’ paychecks. And in the interests of ensuring employees’ freedom to associate, Heritage Action for America — a 501(c)4 group affiliated with the Heritage Foundation — formally “scored” the vote on the Scott Amendment in the vote-a-rama.

The Scott Amendment resembles a provision of the Employee Rights Act that Scott co-sponsored as a member of the House of Representatives in the last Congress that applied to private-sector employees under the National Labor Relations Act. That proposal would have required unions to get an employee’s affirmative consent before using his or her dues for political purposes.

Unfortunately, the amendment did not pass. (You can review the vote here, on the Senate website.) But with major national groups noticing the importance of employee rights provisions, perhaps Big Labor’s vaults of campaign cash taken from members’ paychecks whether they support the candidates or not will meet some countering forces.