Book Review: The Devil At Our Doorstep 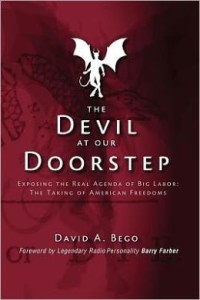 We’ve been chronicling the tactics of the Service Employees International Union (SEIU) for years. But David Bego knows what the SEIU is like up close and personal.  In his first book, Devil at My Doorstep: Protecting Employee Rights, Bego details how the SEIU aggressively came after his business in a typical anti-corporate campaign. His company, EMS, was targeted for unionization for years by Andy Stern’s organizers. Bego said he was happy to allow a union in—but only if the employees were able to vote via secret ballot. Not surprisingly, the SEIU was not interested in democracy. Instead, they took to their usual, outrageous tactics, including:

–  Offering money to employees to sign a card.
–  Getting children to hand out flyers in Bego’s neighborhood on Halloween.
–  Filing dozens of unfair labor practice charges.

In his latest book, The Devil At Our Doorstep, Bego, coming off several victories against the union, explains how his battle is but one small part of the larger war that organized labor has waged on the American people. Bego makes it clear, however, that it takes more than just the labor unions to make this happen. He explains that union officials are able to work with others in the far-reaching progressive community, notably the media and politicians. Without that support, unions would be in even worse shape than they are today.

Bego also provides a plan on how to combat the overreach of labor unions and to take the fight to them. For too long, too many people have been happy just to play defense against organized labor. Bego’s account shows that, unquestionably, unions will not rest until they have regained their former power.

Bego’s book is worth a read to get the perspective of someone who has dealt with the SEIU’s bully tactics firsthand—and won.