Obama Risked Executive Power To Give Labor Its Payback 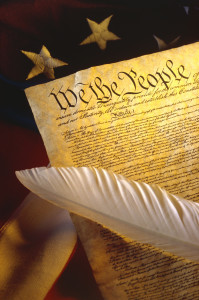 In President Obama’s recently extended quest to duly reward organized labor for helping him take the White House, he took a serious risk. When he couldn’t deliver “card check” with EFCA, Obama opted to illegally appoint three new members to the National Labor Relations Board (NLRB). The risk that Obama took was not only that his picks would be thrown out, but that the President’s recess appointment power would be eviscerated.

The Noel Canning decision coming out of the D.C. Circuit Court of Appeals does exactly that, calling into question the scope of the recess appointment power granted to the President in Article II, Section 2 of the U.S. Constitution. The Constitution states:

The President shall have power to fill up all Vacancies that may happen during the Recess of the Senate, by granting Commissions which shall expire at the End of their next Session. [emphasis added]

In Noel Canning, the D.C. Circuit invalidated the appointments to the NLRB for two reasons. The first was on the grounds that “the Recess” is not like all other recesses of the Senate, but rather only the recess that occurs between sessions of Congress, known as the intersession recess. The Senate leaves for recess at other points in the year, often revolving around holidays and the summer. Each Congress usually meets for two sessions over the two-year term which — in the modern era — typically begin and end based on the calendar year.  In this case, however, the Senate was not in recess, deciding to instead conduct pro forma sessions that continued the first session of the 112th Congress until January 3, 2012. On that same day, it started the second session of that term. The appointments were not made until the next day, after the second session had commenced.

Second, the court continued its analysis into the language of Article 2 to determine what “happen” means. In the past, courts had interpreted “happen” to mean “exist” and therefore, it would allow a president to make an appointment to a vacant position that became open prior to the recess. But the DC Circuit ruled that “happen” is more accurately interpreted to mean “arise,” meaning that the vacancy must occur during the intersession recess. In this case, there was no intersession recess on January 3, only the beginning of the second session of the 112th Congress. Even if a recess in between the sessions occurred, the only valid appointee would be Sharon Block, as she replaced Craig Becker. Becker’s term expired at the end of the first session of the 112th Congress, as he was a “recess” appointment in March 2010 (more on that in a moment). Richard Griffin and Terrence Flynn replaced members whose terms had ended in 2011.

The recess appointment power of the President, until Friday, had suffered few, if any, setbacks. But President Obama’s action was a unique one, due mostly to a strange new way of starting and ending sessions of Congress, which began in 2007, when Democrats controlled the Congress and George W. Bush was president. Senate Majority Leader Harry Reid (D-NV) ordered that the Senate never actually enter a recess by conducting pro forma sessions. Article I, Section 5, Clause 4 of the Constitution states:

Neither House, during the Session of Congress, shall, without the Consent of the other, adjourn for more than three days, nor to any other Place than that in which the two Houses shall be sitting. [emphasis added]

Reid, known for his schemes, came up with a plan to block Bush from making recess appointments. By holding a session every three days, even if for mere seconds, Democrats would be able to block any of Bush’s recess appointments. The new Senate calendar would involve the end of the old session and the start of the new on the same day, with no recess in between. We’ll call this the “Reid Calendar.” The Reid Calendar was employed in 2007 and 2008 for that purpose; Bush respected the Constitution and made no appointments.

Flash forward to 2012, with a Republican-controlled House of Representatives that, under Article I, Section 5, must approve the Senate’s calendar. Not surprisingly, Republicans used the Reid calendar. But unlike Bush, Obama opted to ignore the pro forma sessions and make the appointments to the NLRB anyway. Therein lies the fatal flaw that has now put the entire recess appointment practice under scrutiny.

How far back will this decision extend? Right now, that’s hard to say. But at least consider Craig Becker’s appointment, which occurred on March 27, 2010. First, this was an intrasession recess of the second session of Congress. Under Noel Canning, this would be invalid, because it is just “a recess” and not “the Recess” that occurs between sessions. Second, Becker’s seat had been open since 2008, meaning that it did not “happen” in the recess.

There could be a saving grace for Becker, however. The “de facto officer doctrine,” established in the 1995 Supreme Court case Ryder v. United States “confers validity upon acts performed by a person acting under the color of official title even though it is later discovered that the legality of that person’s appointment or election to office is deficient.” But there is also one exception, according to the Court: “We think that one who makes a timely challenge to the constitutional validity of the appointment of an officer who adjudicates his case is entitled to a decision on the merits of the question and whatever relief may be appropriate if a violation indeed occurred.”

All of this remains in the hypothetical realm until the Supreme Court takes on the case, which is very likely. Because other federal courts have ruled differently on the president’s recess appointment power, this creates a circuit split, meaning that there is different law in different parts of the country.

We knew that President Obama was willing to turn a blind eye to forced association for the sake of supporting labor on blocking right-to-work. But the NLRB appointments may prove to be his most extreme attempt at payback yet. Former Attorney General Ed Meese and Todd Gaziano of the Heritage Foundation deemed the appointments a “constitutional abuse of high order.” The D.C. Circuit agreed. It may be only a matter of months before the Supreme Court agrees.

How much does President Obama think he owes organized labor? Enough to forever change the American presidency.