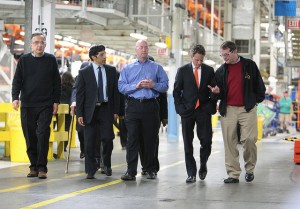 Though the size and influence of the United Auto Workers (UAW) has waned  over the past couple of decades, the union cashed a substantial amount of political capital to help secure the 2007 bailout of the auto industry. As The Wall Street Journal reports, the union has made sure to protect its members–even at the expense of employees in other unions.

General Motors’ (GM) Moraine (OH) plant was one of the most productive and cooperative factories, yet it was closed following the automaker’s 2007 labor pact with the UAW.  Two years later in the midst of a recovery, Moraine’s 2,500 laid-off workers are barred from transferring to other plants under a deal brokered by the UAW during GM’s bankruptcy–locking them out of the industry’s rebound.

The problem: Moraine’s workers weren’t in the UAW.

Originally an appliance factory, the plant moved to automobile manufacturing under GM.  The workers there elected to stick with the International Union of Electrical Workers (IUE), rather than join the UAW. However, they generally accepted contracts negotiated by the UAW.

When GM began having financial difficulty in 2007, IUE leaders decided to break ranks with the UAW and offer concessions to keep GM and Moraine afloat. However, as the company’s financial situation worsened, and GM and the UAW began negotiating, IUE had no seat at the table. Unfortunately, by the time GM had satisfied the UAW, there was nothing left for IUE workers in Moraine.

In the end, “we had to take care of our own members,” says Cal Rapson, the former UAW vice president leading negotiations with GM. “It was unfortunate what happened to the others. But there wasn’t enough to go around.”