As unions are finding out, there’s nothing quite like being on the unpopular side of an election year issue. A fresh round of polls shows that, unlike unions, right-to-work legislation is very favorable in the Midwest. 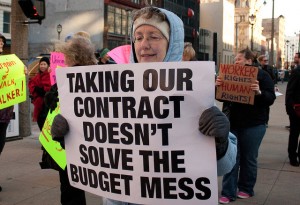 In Ohio, a new report by the Buckeye Institute shows that “[i]ncome, job numbers and capital investment is growing faster in states that have enacted right-to-work laws than in those that haven’t.” The Institute fingered mandatory union membership and dues payments as a culprit.

Furthermore, voters “support the state’s Emergency Financial Management law which authorizes the governor to appoint an emergency financial manager to take over bankrupt local governments with the power to void union contracts,” by a 52-to-35 percent margin.

“EFMs, have been appointed in four cities and two school districts, including Detroit, so far; Snyder has tried to get Detroit Mayor Dave Bing to take actions that will avoid an EFM for the city government, so far unsuccessfully.” (The Washington Examiner, 3/30/12)

Unions have argued in court that Gov. Snyder’s move would violate their collective bargaining rights. But now, U.S. District Judge Arthur J. Tarnow has thrown out the unions’ request for a temporary restraining order, clearing the way for Snyder and Detroit to resolve the city’s crisis. With union obstructionism on such prominent display, it’s not shocking that union popularity is on the downturn even in Michigan.

In Minnesota, however, the disorganized state GOP is backing away from right-to-work legislation out of fear of a Democratic backlash. Politico reports that “[n]o state party may be in worse shape” than the Minnesota Republican party—and the trouble shows in its unwillingness to risk a fight with unions even when other factors are on its side.

Still, at the state level, unions seem to recognize that protests and demonstrations can only go so far in cowing legislators who lack confidence. They’re pouring an unprecedented amount of money and energy into influencing the 2012 race for the White House:

Unions spent over $400 million on elections in 2008, and nearly every penny went to Democrats. They spent over $200 million in 2010, and the single largest donor in that election was the American Federation of State, County, and Municipal Employees (AFSCME), which spent $87.5 million. AFSCME has already pledged $100 million for the upcoming election. As AFSCME is a public employee union, that means the largest funder of Democratic campaigns is you, the taxpayer. Once upon a time Democrats—and even the AFL-CIO’s former president John Sweeney—opposed this kind of public sector union campaigning on principle. (The Weekly Standard, 3/26/12)

Faced with the rise of principled, practical right-to-work legislation, unions won’t change their tune anytime soon. At this rate, 2012 could be their make-or-break year.