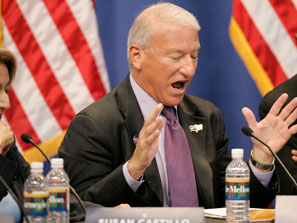 Andy Stern may no longer be the head of the Service Employees International Union, a post he left in April, but that doesn’t mean he’s out of the news.  According to the AP, he’s being dragged into an FBI investigation.  Just read:

“The FBI and the U.S. Labor Department are investigating prominent labor leader Andy Stern in their probe of corruption at the Service Employees International Union, according to two people who have been interviewed by federal agents. The two organized labor officials met with federal agents this summer to answer questions about a six-figure book contract that Stern landed in 2006 and his role in approving money to pay the salary of an SEIU leader in California who allegedly performed no work. […]

One person who spoke to federal agents twice, in May and June, said they asked about a 2006 contract in which Stern received a $175,000 advance from Simon & Schuster to write the book “A Country That Works.” The SEIU and its locals bought thousands of copies of the book after it was published. The union also paid thousands to fact-check and promote the book, but Stern pocketed the advance.