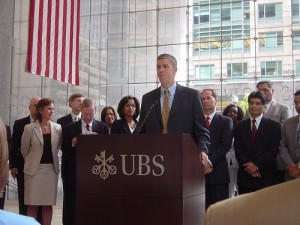 President Obama’s education chief, Arne Duncan, delivered a speech last night aimed squarely at those who oppose increased transparency and accountability when it comes to our nation’s school system. Speaking in Little Rock, he played off of the Los Angeles Times’ recent series that exposed the Los Angeles Unified School District’s hesitance to utilize data to determine which teachers were most effective – and union opposition to value-added evaluations that determine the impact a teacher has on the long-term prospects of their students.

Essentially, the Times took seven years of student test data and developed what is called a “value-added” analysis to show which third- through fifth-grade teachers are making the biggest gains. The results are about to be posted on the newspaper’s website in a searchable data base by teacher name — taking transparency to a whole new level.

Needless to say, concerns are running very high in Los Angeles– not only among teachers themselves but also among a wide spectrum of administrators, academics and reformers who question the validity of the scores and the value of the entire exercise. …

I am a strong advocate for transparency. This is one thing that NCLB got right. By requiring districts to publish test scores for subgroups like minorities and special needs students — it changed the national conversation and forced us to focus more closely on achievement gaps. …

Let’s put out data on dropouts, college enrollment, college completion, loan default rates, and every other kind of data that can help us highlight our remarkable success and help us better understand why too many of our children are unprepared.

Let’s do what the State of Louisiana is doing — tracking student scores to teachers and teachers back to their colleges of education so we know who is doing a good job of preparing educators — because the vast majority of teacher colleges in this country are doing a mediocre job at best.

The truth is always hard to swallow but it can only make us better, stronger and smarter. That’s what accountability is all about — facing the truth and taking responsibility and then taking action.

Emphasis mine, because that’s the key here. It’s understandable that teachers unions are worried about total transparency. While the vast majority of teachers are hard-working and dedicated to their students, a certain number of them are going to either not care about their job or simply be terrible at it. That’s just a fact of life in an organization as large as a school district – as with a massive business, a certain percentage of hires will be bad ones. The trick is finding out which apples are rotten and removing them before they spoil the rest of the batch.

Teachers unions, by their very nature, are designed to thwart that removal process. They have been set up to argue against the termination of any employee – to drag out the firing process, to make it as expensive as possible, and to save the jobs of the incompetents under their care. They call this “due process.” We call this obstructionism.

And they’ve been able to get away with this obstructionism because no one knows about it. What the LA Times has done is throw back the curtain. They are about to show us just how many teachers are causing their students to regress, and why nothing is being done about it. The teachers unions are terrified: They’ve already endured a few black eyes, but when the public understands just how deep the problem runs, they’ll turn on the unions for good.

Once accountability – and reforms like merit pay – are in place, you know who the real winners will be? Good teachers. The teachers who lift their students up, who put in the long hours, devise the intense lesson plans, and make students want to improve their base of knowledge. The inspirers.