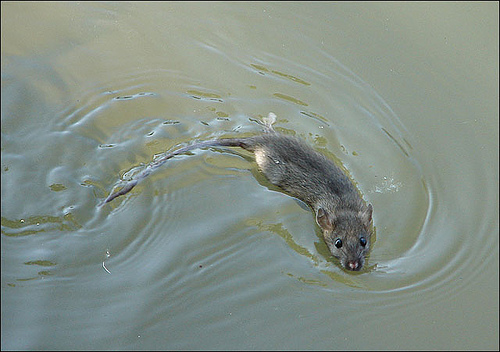 This falls under the “You can’t make this stuff up” catagory. From the Detroit Free Press:

City officials said that as many as a dozen rats were set loose in the [Yonkers] City Council chambers on Tuesday night, when union workers showed up to protest looming layoffs – a showdown that ultimately included expletive-filled taunts and squealing, scurrying rats. […] The incident came as dozens of Teamsters and other union members gathered outside City Hall to demonstrate against job cuts and included the appearance of a giant inflatable rat that is common at union rallies. Union members protested the cuts during the public comment portions of a council budget meeting and a subsequent regular board meeting.

Calls at Local 456 of the International Brotherhood of Teamsters were not returned. Murtagh said he accepts assurances from union leaders who told him that they had no involvement in the release of the rats, an act he called “outrageous conduct by anyone, most especially employees of the city.” But he also said the incident raised questions about the union leadership. “If you take them at their word, then that shows to me that they have a complete lack of control over their membership, and indeed that their membership has a complete lack of respect for their leadership,” he said.