With $1 trillion shortfall in retirement funds, state governors (try to) push back 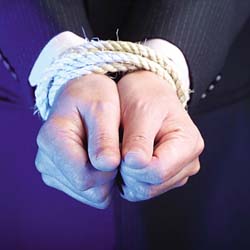 A Reuters article entitled “States face hurdles in cutting worker benefits” could have subtitled “Unions made this reporter feel bad for governors”, because that ended up being how it read. Instead, the subheading was:

“State governors working to close yawning deficits are again eyeing a tempting target — the billions of dollars in benefits and wage hikes that public workers won in boom times.”

The article covers Governor vs. Union (and huge budget shortfall) drama in Massachusetts, Maryland, California, Hawaii, New York, New Jersey, and Rhode Island.  The most interesting take on furloughs was from none other than Hawaii’s Governor Linda Lingle:

“Courts in states from Maryland to California have partly blocked unpaid furloughs, although some unions still prefer them to lower pay, as Hawaii’s Republican Governor Linda Lingle found after the teachers’ union spurned graduated pay cuts.

“They said ‘Oh no, we have to treat everybody the same,'” Lingle told Reuters in late April. “I couldn’t get them to accept that a furlough costs a lot more to someone at the bottom of the pay scale.””

Regardless of who gets hurt the most by cost saving furloughs, many governors are left with the furloughs as their only option. And it’s the only option that public unions seem willing to consider. Forget long term solutions. Those aren’t even to be mentioned.