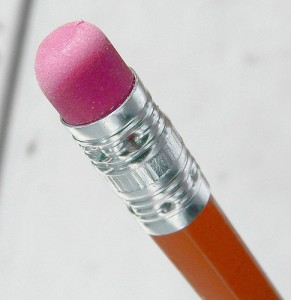 Over at the Washington Post, one of their education bloggers, Jay Matthews, highlights an intriguing proposal from the Hoover Institution’s Eric A. Hanushek. Hanushek suggests using stimulus funds to simply pay incompetent teachers to go away:

He summarizes his plan for turning school budget cuts and more federal bailout funds into an opportunity to improve the teaching ranks: “The first-best solution, based on several decades of consistent research findings, is to lay off ineffective teachers selectively while letting class sizes drift up a bit,” he writes. “When the bailout ends, schools would be in a stronger financial position because the permanent teacher workforce would be reduced by the slightly larger class sizes, and this workforce would be of higher quality.”

As Matthews points out, the biggest problem with the plan is determining who, exactly, comprises the worst of the worst. Given the refusal of unions to allow standardized testing to stand in for a general measure of teacher accountability, it’s hard to say. And asking the schools directly is no better:

I asked some Washington area school districts, nationally regarded for their high performance and sophisticated management, what percentage of their teachers were rated satisfactory in the last evaluation. I subtracted the number they gave me from 100 percent to calculate what portion of their teaching ranks could be considered ineffective. The results:

Fairfax County 0.9 percent, Montgomery County 5 percent, Loudoun County 1 percent, City of Falls Church 0.45 percent, Prince William County 1.7 percent. I could not find a school district in the area that admitted to having more than 5 percent unsatisfactory teachers. Most said the figure was closer to 1 percent. Experts tell me this is common throughout the land. I don’t believe the numbers.

The idea that only one in one hundred teachers isn’t up to snuff in a nation that ranks third in money spent per-pupil and lags behind in every indicator of student success is, to put it mildly, kind of insane.