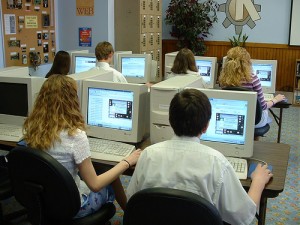 One of the more shocking aspects of the Race to the Top application process is the way that teachers unions across the country have decided to fight against their school districts receiving more money. In Massachusetts, for example,

the American Federation of Teachers Massachusetts, one of the two statewide teachers unions, has now urged its affiliates not to sign on to the [Memorandums of Understanding laying out the state’s application] and, worse, to withdraw their commitments from Round 1.

This is a particularly regrettable development as AFT Massachusetts represents teachers in many of the urban districts including Boston, Lawrence, Salem, Lynn, and Lowell that could benefit most from participation.

The Colorado Education Association, the state’s largest union, opposes the bill. It says the details about how teachers will be evaluated should be worked out first, arguing there’s a lack of trust between administrators and teachers after years of reacting to the latest test scores.

At a time when education funding is about to drop by 6.4 percent, the union says districts and the state doesn’t have the money to cover yearly evaluations and new ways to develop new assessments besides the state’s current standardized tests, the Colorado Student Assessment Program.

What is there to gain from winning Race to the Top funding? Well…funding!

Two states that changed their teacher evaluations, Tennessee and Delaware, won $600 million in the first round of competition.

It’s amazing: Teachers spend years complaining about being underfunded, and when the chance comes along to rectify the situation unions cross their arms and stymie progress.