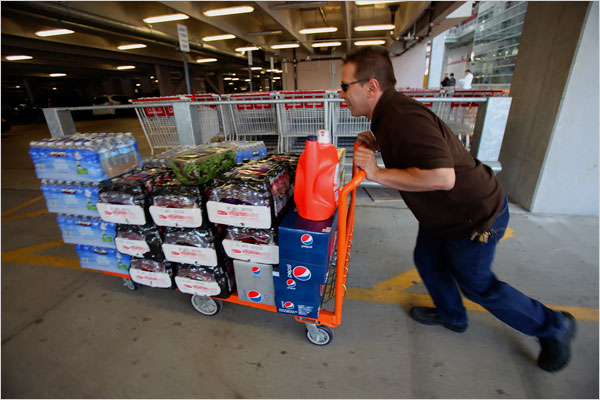 So while perusing The New York Times slide show on entitled “Buying in Bulk”, I ran across the an image that caught my eye.  And the caption read as follows:

“PUSHING THE CART Joe Ruggiero, 46, a maintenance technician for Local 100 of the Transport Workers Union, with his co-worker Robert Alfonso, 55

IN THE CART Multiple 20-bottle cases of Vitamin Water ($16.99 each)
AT THE REGISTER “Approximately $800”
We have Family Day, we have African American Day, Indian Day, Russian Day, Italian Day. We have cultural events, and that’s what these beverages are for. We keep it in stock and we get it from Costco.”

Are the Transport Workers Union in New York City perhaps trying to save money? Slightly out of character, I realize. This means at least one AFL-CIO affiliated union member recognizes the superior delivery mechanism in place at Costco that allows them to cut distribution costs and therefore pass along great savings to consumers.

Anyway, I just thought it was nice to see a union member darkening the door of a Costco, considering the accusations flying around last week against Coca-Cola and 7-11 and Costco working together to bring the same beverages to other customers more efficiently.

Image used at the courtesy of The New York Times.