No one puts The Govenator in a corner 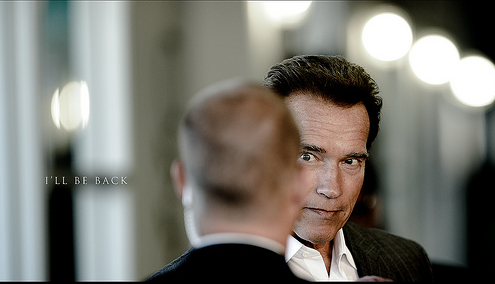 Here are a few things about Schwarzenegger that you can rely on.

He will always have that accent. He will always “be back.” And he doesn’t like to feel cornered.  Even his alter egos are pretty good at getting themselves out of tough spots. So what exactly is the SEIU thinking they will gain from fiscally/physically throttling the state of California under Schwarzenegger’s watch?

According the some, the SEIU‘s efforts may lead to the very thing the SEIU fears most–fewer union dues…..Sorry…..I mean layoffs of state workers.

From The Sacramento Bee:

Lawyers for state employee unions are popping champagne corks because of a judge’s order that could force Gov. Arnold Schwarzenegger to halt furloughs of tens of thousands of state workers. There’s no reason to celebrate. By aggressively and successfully challenging Schwarzenegger’s authority to issue furloughs, the Service Employees International Union 1000 and other unions are painting the governor into a corner.  That corner could lead him to lay off thousands of state workers, a much more painful alternative than furloughing workers three days a month. […]

It should be noted that the governor struck a deal with SEIU 1000 earlier this year that, among other things, would have reduced furloughs to once a month. But then SEIU’s parent union led the fight against Proposition 1A, which included an extension of higher taxes. When 1A went down, the state was left with less money to pay for the SEIU 1000 contract – one reason the Legislature never ratified it. Now that the union has won this round in court, its lawyers say they will seek back pay for state employees who took days off because of furloughs. Imagine the public reaction if they are successful. By taking this stance, SEIU 1000 seems intent on creating a public backlash. That hardly will be in the best interests of its 95,000 members and other state employee unions.

With every Californian’s eye focused squarely on this issue, it would be a welcome thing indeed for Californians to take notice of who bankrupted their state in the first place.

Here’s a piece about one of the last times they put the governor in a corner.