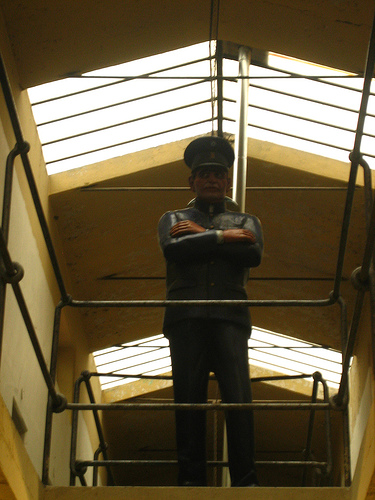 State inspectors in a recent report describe the Erie County penitentiary as a management-challenged prison where deputies abandon their posts, legitimate inmate grievances go nowhere, and would-be reforms move slowly. Commission of Correction Chairman Thomas A. Beilein called some findings unsettling when his inspectors described their most recent tour of the Erie County Correctional Facility, from which inmate Ralph “Bucky” Phillips escaped in 2006, killing a state trooper during his months on the run.

The inspectors said they found serious problems in areas controlled by Teamsters- represented jail deputies, who generally guard inmates who have not been sentenced in overflow areas that take pressure off the Holding Center in downtown Buffalo.

Corrections officers represented by the Civil Service Employees Association generally guard sentenced inmates, the largest number of inmates at the facility in Alden, which usually holds more than 900 people a day. The inspectors said they found Teamsters- represented deputies leaving posts that involve active supervision over presentenced inmates, a violation of the state’s basic standards. The inspectors cited a serious break in the Teamsters chain of command. Each union member is accountable to the supervisors represented by their respective union. While all of the personnel are accountable to the facility’s “chief” and “superintendent,” the correctional facility has been without a chief for more than a year.

This “break” in the chain of command makes it sound like a middle man is missing. But I’d say everyone from the bottom up has left their post.  New York’s not the only state having problems with union represented prison guards. California would now like to weigh in.