Unions, I Fell For You Like A Child, Oh, But The Fire Went Wild 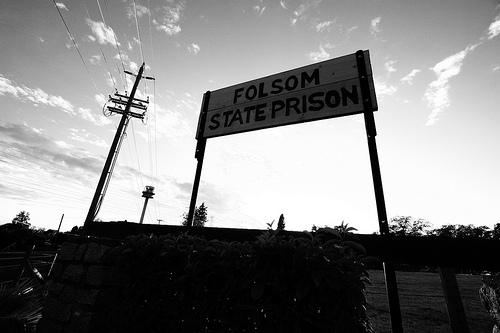 In California this month, prisons have been under lockdown after rioting at one facility. Prisons in California are overcrowded, the system costs $10 billion dollars a year (70% goes to salary and benefits; 5% to educational and vocational programs), and the state boasts the highest recidivism rate in the country.  It is an understatement to say that the cost of prisons are unsustainable given California plethora of programs going into the red.  NPR recently sent Laura Sullivan to Folsom Prison, site of Johnny Cash’s legendary concert, to figure out how the state that was once a fine example of a functioning correctional system is now the “model every state is trying to avoid.”

When Johnny Cash came to Folsom:

The morning that Cash played may have been the high-water mark for Folsom — and for the California Department of Corrections and Rehabilitation.  The men in the cafeteria lived alone in their own prison cells. Almost every one of them was in school or learning a professional trade. The cost of housing them barely registered on the state budget. And when these men walked out of Folsom free, the majority of them never returned to prison. It was a record no other state could match.

Today, things could not be more different:

Folsom was built to hold 1,800 inmates. It now houses 4,427. It’s once-vaunted education and work programs have been cut to just a few classes, with waiting lists more than 1,000 inmates long.  Officers are on furlough. Its medical facility is under federal receivership. And like every other prison in the state, 75 percent of the inmates who are released from Folsom today will be back behind bars within three years.

How did California’s prison system become the utter failure that it is today, and how are unions involved?  Here follows the damning tale:

In three decades, the California Correctional Peace Officers Association has become one of the most powerful political forces in California. The union has contributed millions of dollars to support “three strikes” and other laws that lengthen sentences and increase parole sanctions. It donated $1 million to Wilson after he backed the three strikes law. And the result for the union has been dramatic. Since the laws went into effect and the inmate population boomed, the union grew from 2,600 officers to 45,000 officers. Salaries jumped: In 1980, the average officer earned $15,000 a year; today, one in every 10 officers makes more than $100,000 a year.

Lance Corcoran, spokesman for the union, says it does what is best for its members. “We have advocated successfully for our members,” he said. But he disputes that the union has purposefully tried to increase the prison population. “The notion that we are some prison industrial complex, or that we are recruiting felons or trying to change laws, is a misnomer,” he said. Campaign records, however, show much of the funding to promote and push for the passage of the laws came from a political action committee the union created. It is run out of a group called Crime Victims United of California.  Its director, Harriet Salarno, says the committee is independent from the union. But a review of the PAC’s financial records shows the PAC has not received a donation from another group besides the union since 2004. Corcoran does not deny that the two are closely connected.

“We support a number of victims’ rights groups,” he said.  When asked why the correctional officers union is involved in victims’ rights at all, Corcoran said: “There are people that think that there’s some sort of ulterior motive, but the reality is we simply want to make sure [the victims’] voices are heard.” But Corcoran acknowledges that the union has benefited from the increase in the prison population after these laws passed.

“We’ve had the opportunity to grow,” Corcoran says, “and that has brought with it both success and criticism.”

The union’s “opportunity to grow” has cost billions of dollars to the taxpayers of California, notwithstanding the egregious human cost.

Listen to the full story here