SEIU: Giant letters at public protests should have same impact as giant checks to politicians. 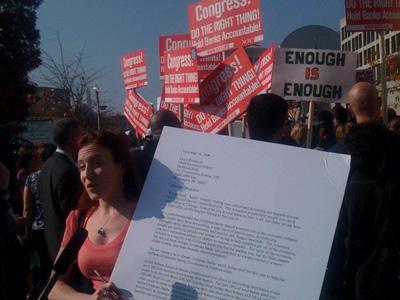 More than a 150 people gathered outside Goldman Sachs’ offices here on Monday to demand that the investment bank donate billions set aside for employee bonuses to families at risk of foreclosure.  The event was organized by the Service Employees International Union and the community group National People’s Action, which staged a similar protest outside the Chicago offices of Goldman and Wells Fargo & Co. (WFC) last month. […] Protesters chanted, “Too big to fail, too big to exist,” as they held posters proclaiming “Wanted: Lloyd Blankfein” that were emblazoned with a photo of the Goldman CEO. […]

After SEIU President Andy Stern and various community and religious group leaders whipped up the crowd with speeches, the protesters pushed toward the doors of the building where Goldman’s offices are located. They demanded that people inside accept a letter, blown up and mounted on poster board, addressed to Blankfein. The letter called on Goldman to donate its entire 2009 bonus pool to people facing foreclosure, asserting that just 10% of the money could prevent 200,000 families from losing their homes and lift 10,000 families out of poverty.

The building that the SEIU decide to grace with its presence yesterday is 101 Constitution Ave. NW, where Goldman has its DC headquarters. Funny thing is, the building is actually union-owned by the United Brotherhood of Carpenters and Joiners of America, and Goldman Sachs actually rents space in the building. It’s one of the most coveted slabs of real estate in Washington. See below: 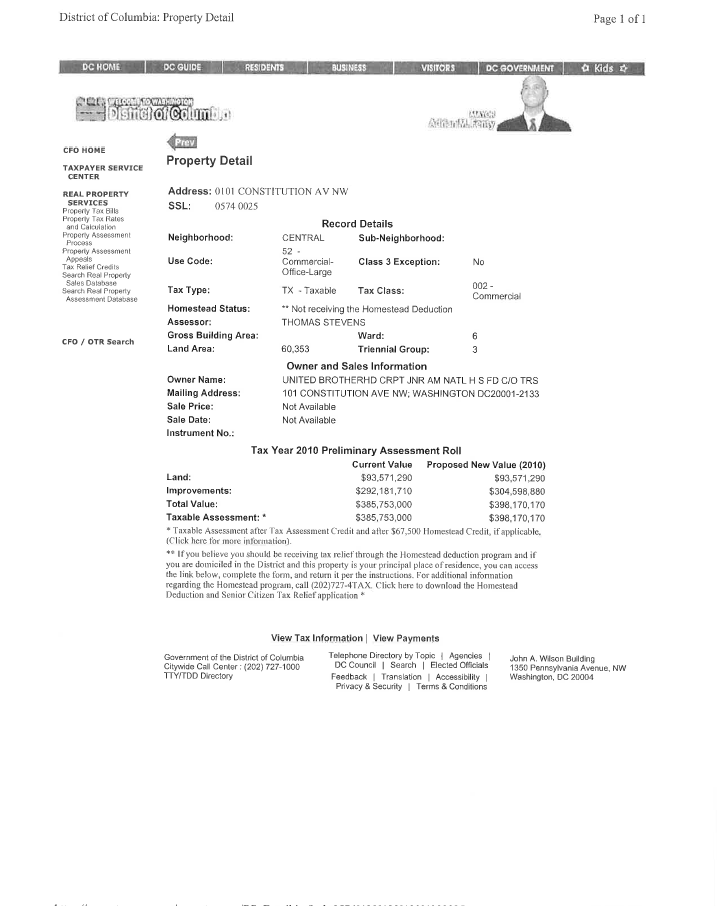 I wonder if McCarron enjoyed the view (and the noise) yesterday. Andy Stern sure owes him one.  That is if Andy Stern can pull himself away from White House dinners.

My vote is no.

Frankly, Andy Stern could probably care less about the ruckus he caused yesterday (he never does anyway).  Did I forget to mention that the carpenters union was with the Change to Win Coalition, until it disassociated itself from the SEIU this summer?

Perhaps this protest had two goals. Here’s a link to a photo slide show from the event.

Image courtesy of The Business Insider.