When Hell Freezes Over? 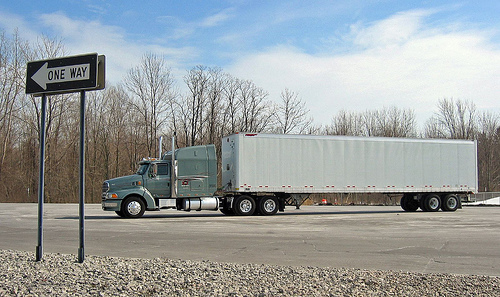 It is a strange day when the Teamsters and The New York Times vehemently agree on something. . . and President Obama disagrees.

Obama nominee Anne Ferro has been the president and CEO of the Maryland Motor Truck Association since 1997 and serves as Maryland’s Motor Vehicle Administrator from 1997 to 2003.  Her friends say she has a passion for highway safety; her enemies make sure no one  forgets she is technically an industry lobbyist. Notwithstanding that Craig Becker, nominated to the National Labor Relations Board, was counsel to the SEIU, and and UNITE HERE lobbyist Patricia Campos now works in the Executive Office of the President, among others.

The problems began when President Obama named her to the Federal Motor Carrier Safety Administration, an agency that has been roundly criticized since its creation in 2000.

The most contentious issue on the table for the agency since its founding has been hours of service.  In 2003, the agency introduced new regulations that reduced driving time by one hour (from 15 hours to 14 hours), but extended consecutive hours from 10 hours to 11 hours.   Ferro supports new hours-of-service rules, as does much of the trucking industry who are angered what they see as unreasonable constraints.

However, the Teamsters do not support her, and as it turns out, neither does The New York Times, who not only called her a “peculiar choice” with a “disqualifying” record, but cited her support of a policy Bush supported last year. Even the Senators piled on yesterday.