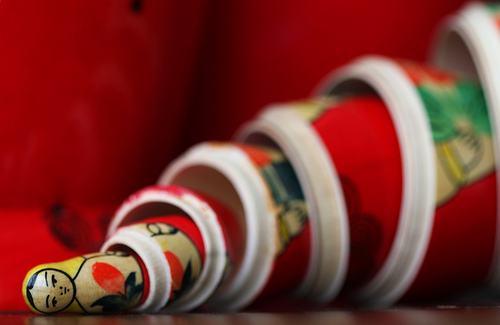 SEIU has been taking a lot of heat for their less-than-subtle organizing of “open” town halls across the country.  No one has been terribly confused about who is behind a health care town hall when those in attendance are all wearing bright purple shirts, sporting ACORN buttons, and carrying fancy signs—not to mention arriving on school buses.

Someone seems to have caught on.

In Kalamazoo, Michigan, last Tuesday, local residents were treated to a kind welcome from a “local” group called the Kalamazoo Single Payer Across the Nation, a group that was helpful enough to put Kalamazoo in its name.  Let’s open up this matryoshka.

As the Kalamazoo Gazette reports:

It was advertised as a Kalamazoo town-hall meeting, sponsored by a new, local, all-volunteer group with a sole focus of advocating for a single-payer government plan for national health care.  But Michigan Citizen Action, a paid, Kalamazoo-based advocacy group with ties to national public-employee unions and a nationwide network of “progressive” interest groups, was an unadvertised presence Tuesday at the meeting at the downtown Kalamazoo Pubic Library. MCA’s participation was not disclosed by the official sponsor, Kalamazoo Single Payer Across the Nation, or by three paid MCA staff members who distributed literature and collected names from people who attended.

It gets even better:

Kudary [resident] said he declined to provide his name and contact information when he was shepherded into the Kalamazoo Public Library meeting room by a woman distributing “Health Care for American Now” stickers. Kudary said he recognized the logo from HCAN, a pro-national plan group directed by a number of U.S. labor unions, the progressive group MoveOn.org and USAction.  When a Kalamazoo Gazette reporter asked who was collecting the sign-up information, MCA was not mentioned. MCA’s Web site shows it is affiliated with HCAN and USAction. Chris Killian, spokesman for the 40-member Kalamazoo Single-Payer Across the Nation organization, said MCA “asked for an opportunity to join in the momentum” after KSPAN announced its forum.

A state level group, “joining the momentum” of a local group, associated with a national group, with a steering committee that includes the AFL-CIO, ACORN, UFCW, and the SEIU? After opening up all the dolls, the smallest one is still wearing a bright purple shirt.