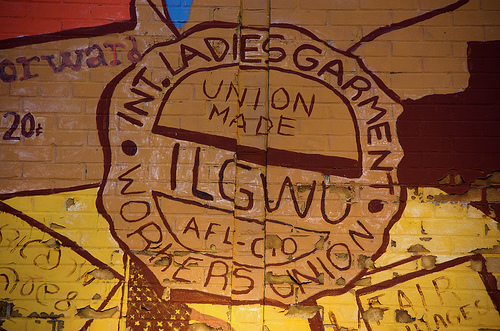 Here’s a brief history lesson. In April, Bruce Raynor was suspended from his position as General President of Unite Here and accused of the following things in the press release signaling his removal:

” [B]ecause of his actions violating the Union’s Constitution. Actions have included trying to remove the International Union from control of the Amalgamated Bank, the Union’s pension and benefits funds, and the Union’s building in New York City, as well as fostering the illegal secession of joint boards from the Union.”

Thanks to his aforementioned relationships, Raynor found a soft place to land—as the SEIU Executive Vice-President, and brought along his Workers United colleagues.

Since his removal, UNITE HERE’s ire has only increased since April, culminating in a cathartic press release on August 10, 2009 entitled “Bruce Raynor’s Legacy:  The Mismanagement of Garment Workers’ Assets.” The release simply proclaims it is the “First in a Series,” underlining the bitterness behind it—and the fact we can expect more back stabbing that is endemic to union infighting.

The four page report expands on the apparent root causes of Bruce Raynor’s suspension and uses an apparently deserved, if slightly inordinate, amount of quotes in the first three lines:

SEIU recently released a report purporting to provide a “history lesson” regarding the assets of Unite Here. While Bruce Raynor now charges Unite Here with “laying claim” to union assets that rightfully “belong” to him, the historical record provides a far different story.

It then provides its own “history lesson,” outlining Raynor’s handling of The Amalgamated Bank of New York, his liquidation of International Ladies Garment Workers Union property, union raids, insolvent financial practices, and bribes, all occurring during his tenure at Unite Here.   We can now perhaps assume that since that he is gone, we can expect no such future practices from Unite Here, who were simply victims under his leadership.  But I doubt that is the lesson from history.