Kevin Mooney over at the Washington Examiner is doing an interesting series of articles looking at 17 Congressmen who received campaign contributions from unions with a significant history of corruption and embezzlement of member’s dues.

Among the five unions, there were a total of 71 convictions in federal courts since 2001 of felonies ranging from embezzlement and mail fraud to falsifying official reports to government and conspiracy.

Among those convicted were division presidents, vice presidents, secretary-treasurers and business managers. The amounts for the embezzlement convictions were from $5,000 to more than $100,000. 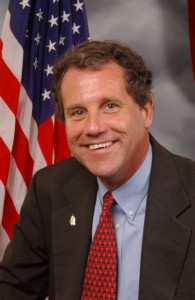 Today, Mooney focuses on Sen. Sherrod Brown, a Democrat from Ohio who is a co-sponsor of the deceptively-named Employee Free Choice Act. According to Mooney: