If the gloves don’t fit… 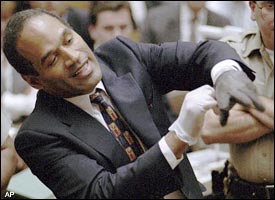 Watching the unions complain about the Department of Labor reporting requirements reminds me of watching OJ try to put on the bloody gloves. They go through all sorts of contortions—twisting and turning to great effect—ultimately arguing that categorizing their electric bill as “overhead” and their photocopiers as “administrative” is some sort of Herculean task. (Never mind that the IRS already requires unions to file categorized expenditures on their annual 990 tax forms.)

The fact of the matter is simple: the unions don’t like their members knowing how they spend their members hard-earned dues dollars.

Considering that, we were surprised to see the left-leaning Center for American Progress (CAP) come out against the DOL’s disclosure requirements in its recent report, “Beyond Justice.” After all, groups like labor unions, CAP, and other so-called “progressives” are typically champions of public disclosure requirements when it comes to businesses, government agencies, and others.

Despite the studies seriously shortcomings, which we debunked on Tuesday, its author, CAP Senior Research Scott Lilly isn’t done defending unions. In response to a post by Carter Wood over at ShopFloor.com, Lilly posted a lengthy comment.

But after eleven paragraphs of complaining about all the paperwork the poor unions have to file, among other things, Lilly never gets around to responding to Wood’s central criticism: that union corruption is on the decline because the DOL’s disclosure requirements deter union officials from embezzling. After all, that’s why disclosure requirements exist in the first place.

The measures that have been adopted at the Labor Department with respect to disclosure and reporting by labor unions and their officials, employees and members do virtually nothing to increase transparency into union finances or reduce the likelihood that corrupt individuals will attempt to raid union coffers. They are crudely and ineptly drawn. They greatly add to the paperwork burden but provide little new or useful information to union members or outside watchdogs.

Maybe Mr. Lilly should tell that to the thousands of union members that rely on our website every day to do research on their own union. And as an outside watchdog, I can personally attest that the DOL’s reports have provided me with a host of new and useful information.

Ironically, its those same disclosure requirements that allow us to look up labor unions’ donations to CAP in 2006. As Carter Wood pointed out over at ShopFloor.com, it turns out that labor unions donated more than $100,000 to the Center for American Progress in 2006. We’ll let you be the judge as to whether you find that information useful.

As a final note, I should mention that our lawyers are looking into whether CAP libeled the Center for Union Facts in their report. We contacted Lilly and CAP’s General Council, but it is two days later and they still haven’t corrected the online PDF. You can read the letter we sent them here.