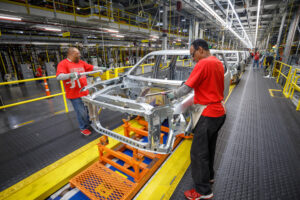 This week, the Center for Union Facts is putting up billboards in Lordstown, Ohio. The two billboards are part of an ongoing campaign to educate workers and the public on the United Auto Workers’ track record. One warns that the UAW is under federal oversight after a corruption scandal. The other notes that a federal investigation put several UAW officials behind bars.

You can see each billboard here and here.

Over the summer, CUF placed a similar mobile billboard outside of the UAW’s Constitutional Convention in Detroit, Michigan. The billboard was in response to an update filed by the UAW’s court-appointed monitor. The report details how union leaders allegedly obstructed his investigation into wrongdoing at the union and even concealed crucial evidence.

The union seems to think it can outrun its bad reputation, but autoworkers and the public deserve to know the truth about the UAW’s track record.

Workers are currently awaiting the results of the first direct election of the UAW’s International Executive Board in decades. Is the union’s status quo about to change, or will it be more of the same at the UAW?