Did Unions Drive Amazon Out of NYC? 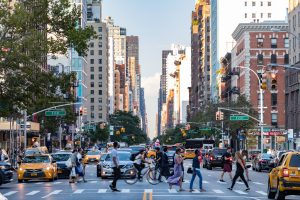 Mayor Bill de Blasio claims that Amazon’s tragic break up with NYC was simply “scuttled by a few very powerful people sitting in a boardroom in Seattle.” But it takes two to tango and de Blasio would be wise to consider what the city—or more specifically, what the city’s labor unions—did to push Amazon away.

Even after Amazon made concessions to the city’s most prominent unions, including promises to hire an estimated 5,000 unionized construction workers, some unions still demanded more. As the American Prospect recently reported, “The AFL-CIO, the Teamsters and the Retail, Wholesale, and Department Store Union (RWDSU) were intent on using Amazon’s New York ambitions as a way to get a union inside Amazon.”

Stuart Applebaum, President of RWDSU, along with the AFL-CIO and Teamsters, called on Amazon to agree to a neutrality pledge, which would allow 2,500 workers to organize at the retail giant’s new location.

But some unions weren’t on board. 32BJ, an SEIU local in NYC, worried that the unions’ continued demand for neutrality “could fan the anti-Amazon flames” and encourage the company to pull out of the deal. Someone should tell Applebaum that if your tactics are too radical for the SEIU, it might be time to reevaluate!

Shortly after, Applebaum and the AFL-CIO leadership made another push for neutrality at a meeting with NY Governor Cuomo and Amazon officials. Just hours after the meeting, Amazon announced it would be pulling out of the deal.

To make matters worse, this isn’t the first time Applebaum and the RWDSU have helped kill a development project and cost the city thousands of jobs.

About a decade ago, Applebaum opposed the Kingsbridge Armory development in the Bronx because the developers wouldn’t sign a living wage/union neutrality agreement. The armory development, which would have created 1,000 construction jobs and hundreds of permanent positions, was subsequently terminated. The site sat empty for years while the city languished under high unemployment in the midst of the Great Recession.

With Amazon’s departure, New Yorkers can once again thank the hubris of union leaders for stripping the city of 25,000 job opportunities.