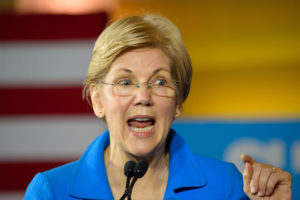 As we’ve written before, Sen. Elizabeth Warren (D-MA) is determined to undermine President Trump’s nominees to the National Labor Relations Board (NLRB).

For example, Sen. Warren has pressured NLRB nominee William Emmanuel, a former labor lawyer for Littler Mendelson, to recuse himself from any case involving class action lawsuits. Her claim is that Emmanuel’s involvement raises conflict of interest concerns, given his experience as a management-side attorney. She has even demanded that Emmanuel disclose all of his former clients, especially those “opposed to collective bargaining”—music to the ears of Warren’s union donors.

How soon she forgets her own standard.

In 2014, Sen. Warren applauded President Obama’s nomination of Allison Burroughs to the U.S. District Court in Massachusetts, claiming “she will be an excellent judge.” In Warren’s words: “Her years of distinguished public service as an Assistant U.S. Attorney in both Boston and Philadelphia, including several years in the Economic Crimes Unit in Boston, along with her time in private practice, allow Allison to bring a wealth of legal experience to the federal bench.”

Burroughs’ “time in private practice” is relevant here, given that she’s currently hearing a case regarding off-label drug promotions. According to a 2014 questionnaire submitted to the Senate Judiciary Committee, Burroughs previously represented a pharmaceutical company in a similar case. She admitted: “I, both alone and with other attorneys, have represented a large pharmaceutical company and a number of individuals, all in connection with various government investigations focusing on the ‘off-label promotion’ of drugs that have been approved by the FDA for other uses.”

Using the Warren standard, Burroughs should have recused herself in the drug promotion case. Yet neither Sen. Warren nor any other Democrat called for her recusal, confirming our suspicion that their NLRB obstructionism is purely political. As a Wall Street Journal editorial recently put it, “Why should Mr. Emanuel be held to a higher standard than Judge Burroughs?”

Sen. Warren will have a tough time answering that one.