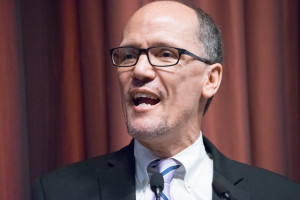 It’s been a rough few weeks for U.S. Labor Secretary Tom Perez. Not only was Perez—the architect of the Department of Labor’s (DOL) job-killing overtime rule—passed over as a vice presidential candidate, but the secretary also sparked a firestorm of controversy.

Why? Because of his ancestry—or, rather, what he said about it.

In stump speeches and interviews, Perez routinely mentions that his grandfather was expelled from the Dominican Republic for opposing the brutal dictatorship of Rafael Trujillo in the 1930s. (Trujillo is known for ordering the racially motivated massacre of thousands of Haitians living in the country in 1937.) “I’m so proud of my grandfather for [opposing Trujillo], even though it was against so many forces in place,” claimed Perez in a recent speech.

But, according to The Wall Street Journal, archival records paint a much different picture. Perez’s grandfather, Rafael Brache, was actually “one of the dictator’s champions during at least the first five years” of his rule. Brache “held a string of high-level offices in the regime, including ambassador to the U.S.” It gets worse:

“Mr. Brache defended Trujillo’s regime and tried, unsuccessfully, to arrange a meeting between Trujillo and President Franklin Roosevelt. As late as 1935, by which time political assassinations and press suppression had become widely publicized, Mr. Brache expressed ‘great optimism’ about Trujillo, according to a State Department memo.”

Talk about bad optics. Allegations of “widespread corruption” in the DOL don’t look much better. Nor do claims that “Perez retaliated against…investigators who reported abuse, fraud and discrimination in the department.”

The so-called “champion for working families” has a lot of explaining to do.