Accountability: Not just for students anymore! 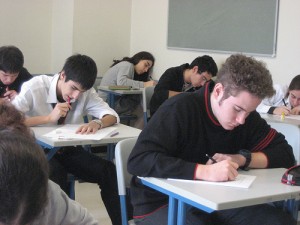 You remember high school, right? Awkward relationships, spirited sporting events, the occasional field trip. And, of course, the reason that you were there: classes, papers, and, a couple of times a year, an exam.

Testing remains an integral portion of every student’s life. One has to know the material in order to advance in their studies. What is an exam but a form of accountability for our nation’s children?

If we are going to hold our kids accountable for learning, it’s only fair that we do the same for their educators. This makes intuitive sense to anyone with a job in the real world: We all have evaluations, and we all know someone who has been let go for failing one.

Just because something makes sense doesn’t mean it won’t have enemies, however.

Consider the recent proposal by New Jersey to hold teachers accountable for their teaching. It’s pretty basic stuff: In order to qualify for a boatload of federal cash, NJ officials have suggested creating a bonus pool that would award teachers based on the quality of the education they provide. This isn’t a plan to fire teachers or eliminate tenure; instead, it would reward excellence. As the New York Times writes,

In addition, the state would offer financial incentives to teachers willing to work with large numbers of struggling students, and designate the most effective educators as “master teachers” and “master principals.” It would also create a new breed of in-district charter schools known as Achievement Academies, which would be authorized by local school boards and led by teachers.

This commonsense measure to reward those who perform is meeting all of the usual opposition from recalcitrant teachers unions. This comes from the New Jersey Education Association:

“Anyone concerned about the existing over-reliance on standardized testing that plagues public education should be alarmed at this proposal,” said NJEA President Barbara Keshishian. “This proposal will call for more and more testing, in all subject areas, in all grades, and teachers’ very careers will be riding on the scores.”

Some may be tempted to ask “What over-reliance? Teachers are held almost entirely unaccountable for the success or failure of their students.” And we would agree! But it’s useful to get a glimpse into the mindset of those who are attempting to stifle efforts at helping our nation’s schoolchildren and stand in constant opposition to rewarding teachers who actually perform well.