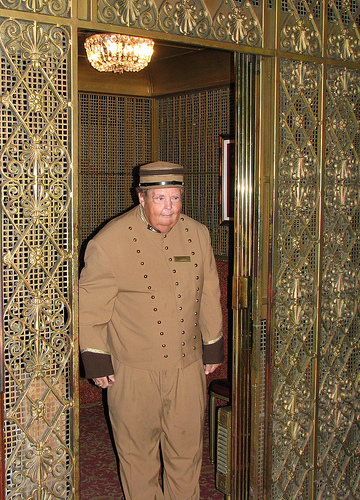 When seemingly every New York City-based news agency saw fit to cover the impending doorman’s strike, “country folk” across the country were left scratching their heads. When the crisis averted at midnight last night, you could almost hear relief pouring out of the news agency’s offices. Twitter lit up with heartfelt relief.

I am not saying that if I had a doorman, I wouldn’t think the world of them.  I am saying that perhaps it’s an organized labor fight that doesn’t exactly help Americans outside of urban centers understand–or have any tolerance for–organized labor. It’s…..declasse.

Especially when The New York Times said this:

If the doormen and other service workers had gone on strike, residents of the affected buildings would have had to perform their own chores, like sorting mail, screening visitors, hauling garbage out to the curb and operating elevators. […] A strike would have disrupted the daily routines of hundreds of thousands of middle-class residents from upper Broadway to Brownsville, as well as affluent owners of Park Avenue penthouses. Along with picket lines in front of many of their homes, they would have been confronted with the loss of the people who sign for their packages, carry their luggage and let the pizza deliverers and dog walkers into the building. Residents of many buildings had been asked to pitch in to sort the mail, announce visitors by intercom, operate elevators and haul garbage to the curb if necessary.

Or when Bloomberg explained:

“It’s going to be annoying because our building told us that if this does happen, there won’t be any collection of laundry, you won’t be able to pick up your packages at the front desk and you’ll have to throw away your own trash on the side of the building,” said Rajeev Sharma, a money manager at First Investors Management Co. who lives in the Atlas Building on West 38th Street. “It’s probably just going to be more stuff to do, more chores to do on the weekend.”

Even the Wall Street Journal couldn’t resist the urge to cover the resolution of the strike:

In reaching a deal, residents of about 3,000 city apartments and condos will see no change in their security, delivery and trash services, all of which would have been jeopardized had a strike occurred.

At least The New York Times was somewhat self aware as to how the whole thing sounded to “the rest of us”, prompting the piece “In Event of a Strike, How to Open the Doors“.