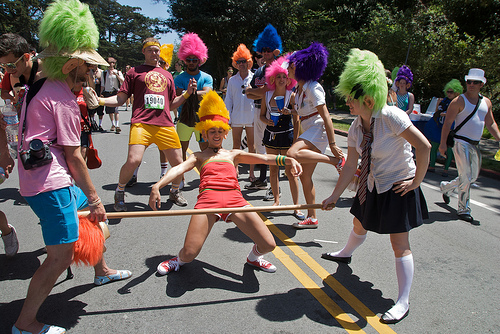 How low can you go? From the LA Times:

Labor unions representing California nurses are attacking key parts of a bill that would overhaul the state’s system for investigating and disciplining health workers accused of misconduct. The objections by the politically powerful California Nurses Assn., Service Employees International Union and groups for other health professions come days before a state Senate panel is set to vote on moving the bill forward. […] Among the proposed reforms are safeguards that would bring California in line with other states, such as requiring that employers report workers who are fired or suspended for serious wrongdoing.

Gov. Arnold Schwarzenegger has made fixing the system a priority since ProPublica and The Times reported last July that dangerous and incompetent nurses were able to keep practicing for years despite accusations of misconduct, abuse or neglect.

I understand not having standards, because then what is there to be held accountable too? I am positive that the damning line in this story is this:

“Among the proposed reforms are safeguards that would bring California in line with other states, such as requiring that employers report workers who are fired or suspended for serious wrongdoing.”

“Unions have taken particular aim at the mandatory reporting requirement, which would oblige employers to notify regulators when workers have been fired or suspended for serious problems. The nurses association, with a membership of 86,000, said the requirement could punish whistle-blowers unfairly dismissed by their employers. Many states already require such reporting.”

That even reads like a lame excuse. This isn’t an endorsement of the legislation. It’s more a “Hey, California Nurses Association, you are starting to sound an awful lot like a teacher’s union.” Now that’s saying something.