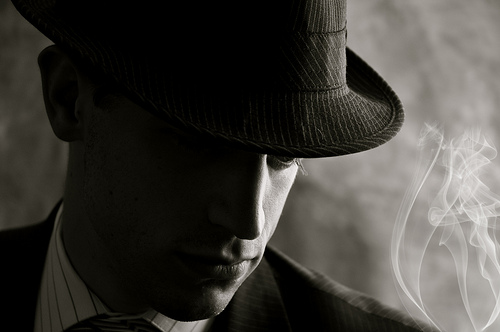 It’s a guilty pleasure reporting on anything that even smacks of a connection between labor and the mob, so yesterday’s newspaper raids were an irresistible event.  You can smell the stereotype wafting across the Hudson River.  I had to share:

According to the AP (not raided):

Investigators in the city raided offices for some of the nation’s largest newspapers Tuesday as part of a corruption probe into a powerful union that has long faced accusations of ties to organized crime, a law enforcement official said. Police officers working with the Manhattan district attorney’s office searched for paperwork related to the Newspaper and Mail Deliverers Union in circulation, production and delivery offices of The New York Times, the New York Post, the Daily News and El Diario, said the official, who spoke to The Associated Press on the condition of anonymity because the investigation is ongoing.

District Attorney Robert Morgenthau said search warrants also were executed at a labor union, but he would not specify which. “The investigation solely concerns business activity and practice and is completely unrelated to the content of any publication,” he said. The Times, Daily News and El Diario-La Prensa confirmed their offices were searched but said their companies were not subjects of the investigation. The Post declined to comment. El Diario-La Prensa Publisher Rosana Rosado said the search warrant sought information into allegations of corruption at the union, which packages and delivers newspapers across the region. The Times said the office of an employee at its plant in the College Point area of Queens had been searched.

The 1,600-member union wields considerable power over news companies that rely on their drivers to deliver hundreds of thousands of papers each day, and allegations of connections to organized crime are not new. Calls to the union’s headquarters were not answered Tuesday. The news deliverers’ parent union, the International Brotherhood of Teamsters, referred inquiries to the local union. The Audit Bureau of Circulations, a nonprofit association of advertisers, ad agencies and publishers that provides media audits, had no comment on the investigation. Morgenthau once charged the newspaper union was under mob control for decades and sought to have a court-appointed trustee take it over in 1992, after an investigation that also involved a search of the Post and Daily News offices.

“The mob has been in control so long that it will take a special master with special powers to clean up the union,” Morgenthau said then. The union rackets ultimately raised operating costs for newspapers, prosecutors said. The probe led to criminal charges against union members including then-President Douglas LaChance, whom authorities accused of being an associate of the Luchese crime family. He had been convicted of federal labor racketeering charges in 1980 and served about five years of a 12-year sentence. He was acquitted in the 1990s Manhattan case, which accused him of strong-arming the Post into switching delivery companies.