Teamsters: Taking on freedom of speech around the world 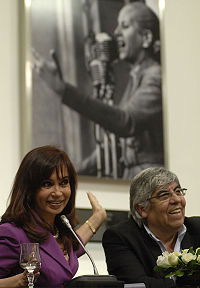 Together: Moyano and Kirchner

Argentina has faced a lot of adversity in the last decade, not the least of which was the Kirchner Administration’s (and the legislature’s) recent attack on free speech and the press, as reported in the Wall Street Journal.   It doesn’t help that the Teamsters locals are cutting off paper distribution, to force unionization under the guidance of their leader and kept man of the administration Hugo Moyano. The Buenos Aires Herald reports:

The workers of four of the six cooperatives that distribute dailies and magazines in different parts of the City of Buenos Aires, have now joined the lines of the Teamsters’ Union after truckers last night blocked the entrance of their workshops threatened to block all their operations. The move is increasing the influence of Hugo Moyano, a loyalist of the Kirchners, over the supply of dailies, as his union now controls the supply of paper. Deputy-elect Néstor Kirchner and his wife, President Cristina Fernández de Kirchner are at odds with dailies Clarín and La Nación, which they have accused of smearing the image of the government. Last month, pro-government lawmakers passed a bill in Congress that generated concerns over growing press censorship.

Teamsters last night used a handful of trucks to block the entrance of all the buildings from where paper is distributed to the vendors in the City, to press the cooperatives to write their employees under the powerful teamsters’ union.  […] After three hours, the directors of the four of the total six cooperatives agreed to meet with union leaders today at the Labour Ministry building to enroll their employees under the union led by Moyano. One of the cooperatives last night refused to comply with the truckers’ demands, and its entrance remained blocked this morning.

Maybe the American Teamsters should cry for Argentina. Or cry foul.