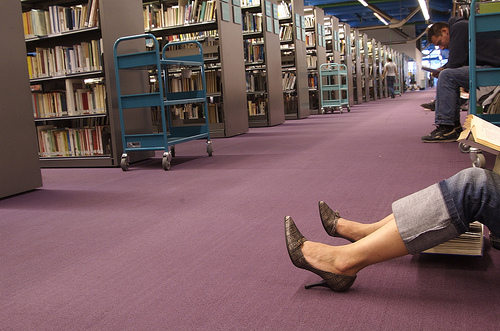 I think it is only fitting to announce the results of the self imposed union led “semantics game” that took place in Palo Alto, CA, yesterday.

About 300 city employees, or 60% of the Local, did not show up for work and marched around in front of City Hall all day screaming “We are Palo Alto, support your city workers.” The Mercury News reports:

The SEIU employees who skipped work marched and chanted at City Hall and the Utility Department’s Municipal Service Center. They billed the occasion as a “volunteer day” and spent a few hours sweeping and picking up trash at city parks and streets. Early in the morning, KCBS radio reported that a crowd of picketers in front of the Municipal Service Center backed up traffic on Highway 101. “(The strike) is unfortunate and not helpful,” said Rob de Geus, a division manager for recreation and golf services who is on the city’s negotiating team. “We have not reached an impasse at this point, and we would like to sit down and continue our negotiations.”

When the strike (by any other name) was announced on Tuesday and it was announced that they would be taking this leave of absence on behalf of the good people of Palo Alto, the Mercury News reported:

Brian Ward, who is on the union’s contract-negotiation team, said workers will spend Thursday afternoon […] reading to children at the Main Library.

Reading to children? Turns out, when librarians don’t show up for work, it’s hard to open libraries. During the strike:

City libraries were particularly affected. All but Mitchell Park were closed, and its hours were reduced. The Utilities Customer Service Center at city hall also was closed. Though other city facilities remained open, they were short-staffed and some services were limited. At the libraries, a steady stream of patrons walked up to find a “closed” sign on the door. Many said they had heard about the strike but didn’t realize it would impact the libraries. […]

Lisa Norman said she comes to the Main Library once a week to pick up new books for her 6-year-old son Dylan’s home schooling. “It’s an effort to get here, and then when you get here you’ve got to reschedule your whole program,” she said, as Dylan slid books into the return slot. Back at city hall, picketer and Mitchell Park library specialist Andrew Joice said he would tell inconvenienced residents: “I’m sorry, but please support us. We need your support.”

I guess the children will have to wait for another day.